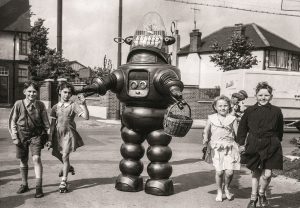 Whether it’s reports of a new and wondrous technological accomplishment or of the danger we face in a future filled with unbridled machines, artificial intelligence (AI) has recently been receiving a great deal of attention. If you want to understand what the fuss is all about, Max Tegmark’s original, accessible, and provocative Life 3.0: Being Human in the Age of Artificial Intelligence would be a great place to start.

The book’s goal is not to tell us what being human will look like in the years ahead, as the title might seem to suggest, but rather to give us the background necessary to understand where technology might lead the human species. In this it succeeds, bringing well-timed clarity to the sometimes muddled public view of AI that has emerged over the past few years.

When computer scientist John McCarthy gave the field its name in 1955, AI’s scholars grappled with the tantalizing prospect that computers might have the capacity to demonstrate broad human-level intelligence, something that is now increasingly called “artificial general intelligence” (AGI). Achieving AGI, however, proved difficult, and researchers were forced to strategically target more narrow tasks, focusing on problems such as understanding images, interacting with natural language, manipulating objects in the physical world, learning, and even playing games. The timeliness of Life 3.0arises from the unprecedented number and range of successes seen in these areas in just the past few years and the ensuing publicity these successes have generated.

Recent depictions of the future of AI run the gamut from benevolent machines letting people live lives of leisure to nightmarish slaughterers of the human race. Part of this dichotomy may come from the fact that not everyone means the same thing when they refer to AI. Some are focused on today’s progress and the potential implications of AI automation (see, for example, Erik Brynjolfsson and Andrew McAfee’s The Second Machine Age). Others, however, are talking about AGI (as in Nick Bostrom’s Superintelligence).

Tegmark successfully gives clarity to the many faces of AI, creating a highly readable book that complements The Second Machine Age’s economic perspective on the near-term implications of recent accomplishments in AI and the more detailed analysis of how we might get from where we are today to AGI and even the superhuman AI in Superintelligence.

Tegmark begins by laying out the range of perspectives currently found among those working in the field. He showcases, especially, the increasingly mainstream view that we should be thinking more deeply about the societal implications of what we create and how we might ultimately design and build AI systems that reflect and respect our hopes and values.

Life 3.0 focuses both on the short-term status of AI and on AGI and the longer-term outlook, projecting from tens or hundreds of years to tens of thousands of years to billions of years ahead. Along the way, Tegmark gives us a physicist’s take on intelligence and computation, the origin and nature of goal-oriented behavior and its implications for AGI, the nature of consciousness and what it might mean for AGI, and—veering from the book’s main focus on AI—what limits physics might impose on our future.

Life 3.0 is interlaced with these and many other thought-provoking ideas. For example, are feelings a consequence of the universe maximizing its entropy? Just as computers work on a “substrate” of 0s and 1s independent of their precise physical implementation in the machine, is intelligence similarly “substrate-independent,” with the potential for implementation not just in biological neurons but also computer hardware? Would intelligent machines that design and build new iterations of themselves represent a new form of “life” (the “Life 3.0” Tegmark refers to in the book’s title)? The book is also populated with numerous science fiction–worthy futures—both good and bad—built on a range of optimistic and often provocative projections of where technology may go and may lead us.

At one point, Tegmark quotes Emerson: “Life is a journey, not a destination.” The same may be said of the book itself. Enjoy the ride, and you will come out the other end with a greater appreciation of where people might take technology and themselves in the years ahead.