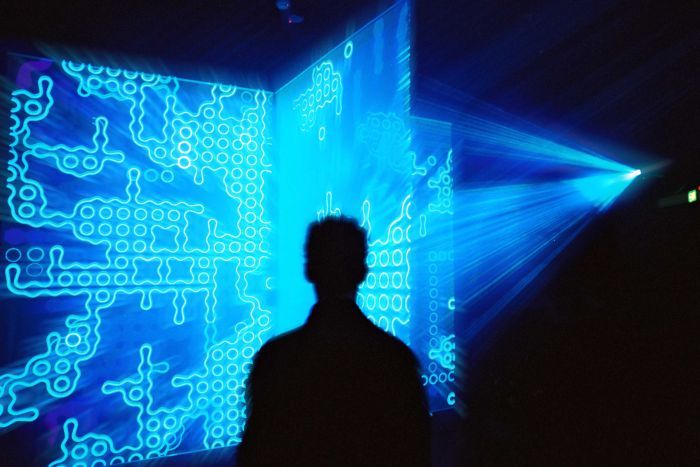 Artificial intelligence is becoming commonplace, from your smartphone and your Amazon account to the driverless cars that will soon grace public roads in Australia.

Often, the response to this reality is one of trepidation and concern, about mass unemployment and the dominance of Big Tech. But that’s not always the case.

“Art is one of the last domains in AI where there is an optimistic view on how humans and machines can work together,” says Dave King, founder of Move 37, a creative AI company.

He says creativity is not a God-given thing. It’s a process, and it takes practice.

“One of the most interesting aspects of creativity is that ability to combine ideas or to draw things together,” he says.

“If you have an algorithm that is working for you in the way you want it to it can source and discover lots and lots of different things.”

AI is already being used in a range of artistic fields. Algorithms trained on millions of pages of romance novels have been used to write poems, and the recent Robot Art Competition showed a range of paintings with brushwork so sophisticated it could have been done by a human hand.

Jon McCormack is an artist and professor of computer science at Monash University whose work incorporates algorithms.

His series Fifty Sisters (2012) featured images of futuristic-looking plants that were “algorithmically grown” from computer code. In another work, titled Eden, he created an installation featuring “virtual creatures” whose movements were influenced by gallery visitors entering the space.

McCormack says when there is concern about AI, it is understandable.

“We’re naturally scared of anything where we take away something from people, particularly something as precious as being creative and art, which we associate with being the most fundamental human [trait] — that thing that differentiates us from every other species on the planet,” he said.

After all, as AI expert Professor Toby Walsh notes: “We have one of the most creative brains out there.”

“One of the oldest jobs on the planet, being a carpenter or an artisan, we will value most [in the future] because we will like to see an object carved or touched by the human hand, not a machine.”

Artists have always used tools to create their work: for Van Gogh, it was a paint brush; for Henri Cartier-Bresson, a Leica camera.

With AI, however, the question becomes one of authorship.

“I see myself as being the artist,” McCormack says of his compositions. “The computer is still very primitive — it doesn’t have the same capabilities as a human creative, but it’s capable of doing things that complement our intelligence.

King says AI currently can only bring a limited perspective to artistic practice.

“They can only draw on what they’ve been trained on,” he says, referring to the reams of data used to create artificial intelligence. “Whereas the human condition is expansive and broad and brings a lot more depth of perspective to it.”

By itself, AI can certainly generate things that looklike art, McCormack says. Whether you could consider it art is a harder question.

“So much of what we think about art is humans communicating to each other,” he says.

“As soon as you bring a computer into the mix, suddenly you’ve got a non-human entity trying to fulfil the role that used to be occupied exclusively by people.”

Soon, however, it may be possible to go further; to consider the machine not just a tool, but a partner or collaborator, with its own ability to create.

“We always think of Lennon and McCartney as being the great musical creative partnership,” McCormack says.

“Will we eventually see a point in time where we have a human and computer partnership that we acknowledge as being more than the sum of its parts?

“If the art was really, really good — if it moved us emotionally in the way the best art does — then I think we would come to start to accept art that’s made by machines.”