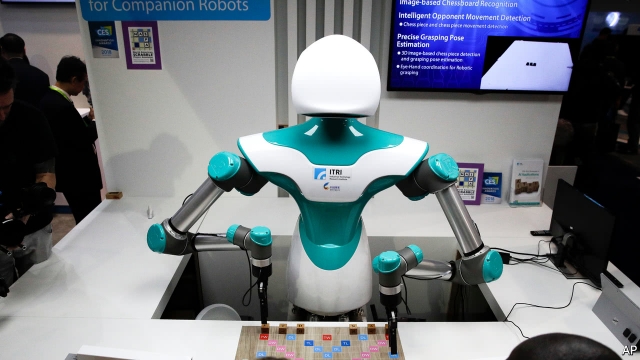 WHEN the electronics industry meets in Las Vegas at CES, its main trade show, buzzwords abound. But rarely has one been as pervasive as this week. “Artificial intelligence” or variations on the theme (“AI-driven”, “AI-powered” and so on) were slapped across most new products—although often the artificial overcame the intelligence.

Those attending gawped at an interactive bathroom mirror on the stand of Haier, a giant Chinese white-goods maker. Look into it, like the Wicked Queen in Snow White, and instead of being told you are the fairest, your data profile appears on the glass. It displays weight (from an interactive scale), urine-test results (from a sensor on a connected lavatory) and other health-related things.

For those attentive visitors who could see past the AI assault, another theme could be identified: firms innovating around how they innovate. Haier’s stand also had a new device that is the result of combining its product development with that of another of its brands, GE Appliances (GEA)—namely, a washing machine that reads wireless tags sewn into garments’ care labels by the manufacturer and picks the right cycle.

GEA, which was bought by Haier in 2016, is launching a new service called Giddy to help other big companies make hit products from fringe ideas. The offering is part of “FirstBuild”, GEA’s innovation lab, which helps entrepreneurs take new concepts through to small volumes of the finished product. An example is an induction cooker that uses Bluetooth to control cooking temperatures from a smartphone.

Japan’s Panasonic used CES to tout a new project to change how it designs, builds and sells consumer products, called HomeX. It wants its divisions to work together rather than stay in silos, and is also collecting more data to understand customers’ needs (instead of engineers adding features that few use).

CES also underlined that firms will increasingly need to co-operate with tech giants on innovation. As more consumers get used to smartspeakers such as Amazon’s Echo, they will want other devices to understand voice commands, too. The e-commerce giant and Google were busy cutting deals to get their virtual assistants into other firms’ products. AI may come to mean “audio intelligence” at next year’s show.