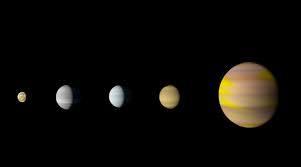 A machine learning technique called a neural network has identified two new exoplanets in our galaxy, NASA scientists and a Google software engineer announced today, meaning that researchers now know about two new worlds thanks to the power of artificial intelligence.

Discovering new exoplanets—as planets outside our solar system are called—is a relatively common occurrence, and a key instrument that scientists use to identify them is the Kepler Space Telescope, which has already spotted a confirmed 2,525 exoplanets. But what’s novel about this announcement is that researchers used a AI system to spot these two new worlds, now dubbed Kepler-90i and Kepler-80g. The planet known as 90i is especially interesting to astronomers, as it brings the total number of known planets orbiting that star to eight, a tie with our own system. The average temperature on 90i is thought to be quite balmy: more than 800 degrees Fahrenheit.

Just as exoplanet discoveries are common, so too are neural networks, which is software that learns from data (as opposed to a program that have had rules programmed into it). Neural networks power language translation on Facebook, the FaceID system on the new iPhone X, and image recognition on Google Photos. A classic example of how a neural network learns is to consider pictures of cats and dogs—if you feed labeled images of cats into a neural network, later it should be able to identify new images that it thinks has cats in them because it has been trained to do so.

“Neural networks have been around for decades, but in recent years they have become tremendously successful in a wide variety of problems,” Christopher Shallue, a senior software engineer at Google AI, said during a NASA teleconference Thursday. “And now we’ve shown that neural networks can also identify planets in data collected by the Kepler Space Telescope.”

Astronomers need tools like telescopes to search for exoplanets, and artificial intelligence researchers need vast amounts of labeled data. In this case, Shallue trained the neural network using 15,000 labeled signals they already had from Kepler. Those signals, called light curves, are measures of how a star’s light dips when a planet orbiting it passes between the star and Kepler’s eye, a technique called the transit method. Of the 15,000 signals, about 3,500 were light curves from a passing planet, and the rest were false positives—light curves made by something like a star spot, but not an orbiting planet. That was so the neural network could learn the difference between light curves made by passing planets and signals from other phenomena.

Eventually, Shallue and his collaborator, Andrew Vanderburg, a NASA Sagan postdoctoral fellow at the University of Texas, Austin, turned the neural network loose on data from Kepler that wasn’t in its original training set. It sifted through data from 670 star systems, focusing on weak signals that could possibly represent a previously undiscovered planet. And sure enough, they found two new worlds.

“Machine learning really shines in situations where there is too much data for humans to examine for themselves,” Shallue said.

Looking through the weak signals from those 670 stars and finding two planets was “proof of concept” that their neural network works, he says. Their next step is to use it on much more data: signals from about 150,000 additional stars. And Shallue concedes that he’s no an astronomy expert, which is why he collaborated on the project with Vanderburg.

While artificial intelligence tools have been used in this kind of research before, “this is the first time a neural network specifically has been used to identify a new expoplanet,” Shallue said during the press conference.