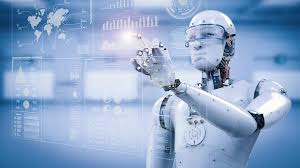 I recently received an email from the folks over at Medium, an online publication I subscribe to. Here’s what it said:

“Hello! It looks like you’re into artificial intelligence, so we rounded up a few of our favorites for you this week. Because you’re a member and an avid reader, we want to make sure you are getting the best stories in the topics that interest you.”

But here’s the thing: that email was certainly not sent by “folks” — at least not in the way we used to think about them. That was a message about AI — sent by AI! An algorithm was studying my reading patterns, decided I was interested in articles about algorithms like itself and sent me a mail recommending that I read more about its brethren…

Are you enthused or creeped out? Reactions vary …

Meanwhile, over at Google, CEO Sundar Pichai was showcasing their own breakthroughs in AI. Specifically, their Google Duplex virtual assistant, which can impersonate human beings to make calls on our behalf. If you haven’t seen the demo, stroll over to YouTube and do so.

The AI assistant calls a salon to make an appointment. In the demo, it is able to talk exactly like a human (complete with pauses and verbal ticks) — and think on its feet when the desired time is not available. In a second instance, the voice bot calls to make a restaurant booking. In this case, the human being on the other side does not understand the question well — but the bot steers the conversation remarkably effectively towards a satisfactory conclusion. More effectively than the human being.

According to Google, those were actual calls made by bots. And it was pretty much impossible for the humans on the other side of the call to realise they were not talking to another human.

Wow. Even if Google might be gaming this a little and only showing us the best recorded calls, I trust you understand the implications: we are not that far from a situation when bots will be engaging with us on a regular basis, and none of us will be able to tell the difference. What happens in such a world?

There is, of course, the displacement of human beings to think about. If bots are already this good at talking and deciding, what happens to the armies of humans we have been employing to do these tasks?

Remember AI bots can be designed to learn as they go, and get better and better, with little human supervision eventually needed.

And is it just low-level jobs at risk? Not so long ago a computer science professor at Georgia Tech designed an artificial teaching assistant called “Jill Watson” to answer students’ questions online.

The students could not tell the difference between Jill and human assistants, and were only brought into the secret at the end of the semester.

There’s another dark side to this revolution. The world is already infested with social-media bots that spread fake news and influence entire elections by swaying gullible voters. They can create not just fake news and images, but fake video as well.

And so great caution is needed. If flawless human impersonation is possible, then will we all soon be taken in by scams where bots sound like they are our trusted friends or organisations.

The human race needs to be ready to embrace this remarkable technology — but also to regulate and harness it. We need a plan for jobs, and a plan to prevent abuses before they spiral out of control.

For those running businesses and institutions, I trust a specific thought has occurred to you upon reading this column: AI is no longer a bit of science fiction you can afford to ignore; it’s right here, right now. It will transform the economics of business, and change the way you think about a “workforce”.

Work on earth will soon be done by a mixture of humans, humanoids and lines of code. You need to be thinking hard about the opportunities and the dangers. Don’t wait until it’s over and others have won the race. Get thinking and experimenting now.

And what if this very column warning you about AI was written by AI? That too is coming.