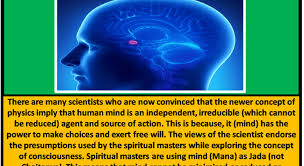 Artificial Intelligence and Cosmic Intelligence are widely used in Science as well as Spirituality. In Science, AI has discovered the classical theory and because of CI, the Quantum theory is evolved. In Spiritual world, AI is covered till we are under the grip of Prakriti or Shakti (energy); whereas, CI is achieved when we experience the functional aspects of Soul. The common platform for Science and Spirituality can be built by understanding mind (CI) or Prana or Energy (AI). This is because, both Science and Spirituality has the basic approach of Space (United of Mind) and energy (Prana or Unification of prevailing forces in the Universe). The forces in the universe are Gravitational, strong nuclear, weak nuclear and Electro-magnetic forces. The combined function of these two (energy and space) can lead to root (God or Parmatma).   In Lay man’s language, let us discuss the functional aspects of AI and CI in brief.

Artificial Intelligence (AI) is used in many places in science and networking specially, in information technology and in management scenario. In spiritual world, Artificial Intelligence (AI) is getting expanded so that the mind loses its existence and the same becomes the mind stuff (Chitta). This means that when the mind is pure (free from any Vritti or fluctuation) and is grown and expanded completely by losing its identity and becomes mind stuff, the cosmic intelligence (CI) takes the charge.  Similar kind of scenario if obtained in Day-to-day life, there will be great changes in information technology and some of the mystery of the universe will be revealed while processing the IT concept.

In management and networking, the planning or processing of the concept in hand along with available organizing domain could be related to hardware system and proper leading or directing the same with controlling factor could be termed along with software scenario. This reveals that the networking is carried out with the available energy at the same time trafficking of the same can be achieved with the help of existing space. Now, the question arises “Whether an individual can understand the utility of AI with its limitation at the same time the coverage of cosmic intelligence (CI) can also be understood?” The answer seems to be affirmative.  In case of complex problem in Science, management, networking and trafficking and in the domain of spiritual field, the understanding of CI is quiet helpful as an umbrella for AI.

The image “Scientific endorsement of limitation of Mind” briefly describes the limitation of Mind. There are many scientists who are now convinced that the newer concept of physics imply that human mind is an independent, irreducible (which cannot be reduced) agent and source of action.

This is because, it (mind) has the power to make choices and exert free will. The views of the scientist endorse the presumptions used by the spiritual masters while exploring the concept of consciousness. Spiritual masters are using mind (Mana) as Jada (not Chaitanya). This means that mind cannot be minimized or reduced or eliminated. The only way left over is to expand the mind as large as Chitta (the mind stuff of inner instrument) free from any Vritti (fluctuation).

2. Artificial Intelligence (AI) can be Planned by Great power like Ravana

Since manifestation of Human race, the great power has extended CI for managing and showing the might.  This is clear to get the life (Prana) of Laxmana revived by getting Sajeevan Butti (Prana or energy Tattva of God) at the time of war in Lanka between Lord Rama and Ravana. The image briefly describes the theme of verse number 11 and 12 of Hanuman Chalisa.

For instance, the great power like ‘Ravana’ has shown its might to make Laxmana breathless or senseless at the time of war between Rama and Ravana. However, the cosmic intelligence acted in the minds of Vaidya reveals the solution to come out from this complexity.  Accordingly, Sri Hanuman ji flew and brought the Sajeevan Butti for the revival of Laxmana’s Prana. The image describes the verse used in hanuman Chalisa while bringing the Sajeevan Butti.

It is interesting to note that when Hanuman Ji went to Himalaya to bring the Sajeevan Butti, he saw all the medicinal plant was emitting the light (a sign of Sajeevan Butti). Hanuman Ji was in confusion to take the specific Sajeevan Butti directed to Vaidya. This kind of scenario (light coming out from all the plant) was organized by Artificial intelligence (AI), might be planned and directed by Asura, but the same was overcome with the help of cosmic intelligence (CI) existed in Hanuman Ji.

2.1 Revival of Prana in Hanuman Chalisa

In normal person, the energy (Prana) and mind (mana) remain at the lower level of the body; mostly below the navel (Manipura Chakra).  When the prana is made ineffective or losing complete sense the individual is as good as dead.

This kind of scenario happened with Laxmana while the war between Sri Rama and Ravana. The revival of Laxmana’s Prana was carried out at that time and the same is described in hanuman Chalisa. The image briefly describes the “Revival of Prana in Hanuman Chalisa”.

Prana (Energy) comes to play when adjustment of Prarabdha Karma (consisting chromosome and gene of parent) is destined; which creates the sheath for Soul to provide its shadow. The shadow of the soul (Prana) can be energized and uplifted with the help of Yogic practice. When the function of Prana is brought below the Swadisthana, one becomes almost dead (as happened to Laxmana). The Sajeevan brought by Hanuman Ji revived the Prana to function in natural way.

2.2 How Artificial Intelligence can be over powered by Prakriti (Nature)?

There are many examples, since creation started, which reveal that Cosmic Intelligence limits the power of Artificial intelligence created by man having the great power of Mind. In this connection, let us analyze the proverb. The proverb says that ‘Man proposes and God disposes’. This reveals that man can act at any proposal by his Artificial Intelligence whereas Prakriti (under the command of God) can dispose under the cosmic intelligence (CI). It is interesting to note that scenario created by Prakriti or Nature at the time of exit of Sri Dalai lama from Tibet was a unique one. The Artificial Intelligence planned and organized by the government of China keeping tight infantry surveillance along with air surveillance got failed at one stroke when the great storm (Hurricane) created by the nature. The nature had regulated in such a way that all manmade arrangement (Artificial Intelligence) got failed.