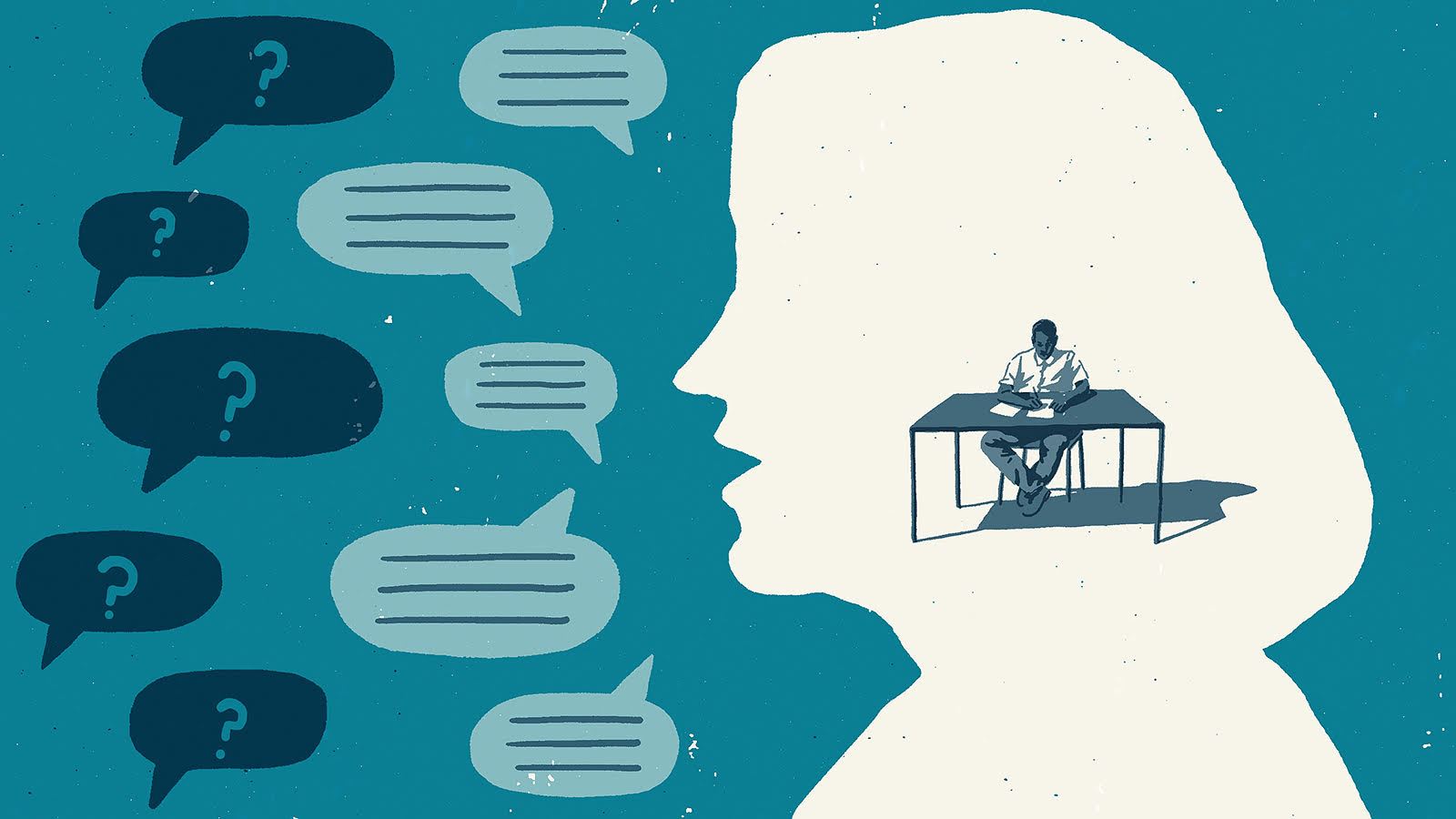 This is the third in The Vanishing University, a four-part series exploring the tech-driven future of higher education in America. Here are parts oneand two.

Jill Watson is the best damn teaching assistant you could ever want. She fields hundreds of questions at a time from frantic 19-year-olds, always answering them in full and at record speed. She hardly makes mistakes. She is, above all, stunningly patient.

“I got comments like ‘Mind blown’ and ‘I want to nominate Jill for outstanding TA award’,” says Ashok Goel, a computer-science professor at Georgia Tech—and Jill Watson’s creator.

Jill is an AI education tool. Her birth came about last year, when Goel was teaching an online class on artificial intelligence; his 300-odd students in the course were sending in thousands of questions at a time, and they piled up, disastrously. Could he explain a concept again? How would the midterm be scored? What classrooms were the weekly study sessions taking place in? When was the next problem set due?

Instead of asking for more graduate student teaching assistants (the class already had eight of them, and they were stretched thin), Goel gathered a few of his best students and created, with the support of tech giant IBM and its famous Jeopardy-winning software, a bot that acts as a virtual TA and tutor for Goel’s horde of curious new students each semester. Jill took her place as the course’s ninth TA last spring—secretly, at first. Students had no idea they weren’t chatting with a human. But Jill—and an increasing number of computer-powered education tools like her, which range from simple automated platforms to full-on robot “professors”—is more than a Q&A bot.

“The way I think about it, there are seven billion people on this earth and about half of them don’t have access to good education,” Goel says. “If we can take artificial intelligence and provide those people with minimal question-answering, who knows what a difference it could make in someone’s life? If something like Jill can provide even basic support?”

With college degrees being the standard entry point to jobs nowadays, universities need to figure out a way to offer more services—but both more cheaply and to a more diverse population, i.e. a nearly impossible task. The more diverse the student body, the more resources are required to teach them. Even when students from poor backgrounds do make it to university, they often get frustrated from lack of support and drop out. Only 56% of students who start a bachelor’s degree finish in six years. Dropout rates are halved when vulnerable students get intensive counseling and tutoring, but providing that takes many hours of labor.

Enter Silicon Valley, of course, an over-enthusiastic industry built on hacking the unhackable.

Hobsons, a company that offers consulting software for higher education, for instance just debuted its first “fully integrated solution for higher education institutions”—essentially a program that provides colleges with case management and predictive analytics tools to supervise its students’ progress. It is just one of many trying to address non-academic student needs with technology. Howard Bell, SVP of higher education student success at Hobsons, says:

We took the gut reaction of the advisor out of the equation. Not that it wasn’t accurate. But sometimes gut is gut, it’s more anecdotal. Not data-supported. Now we actually analyze and say which demographic of students is performing at or below what we consider the norm for general population students—then you can figure out where they’re having trouble and why.

At one university, for instance, Hobsons “got very granular” and was able to identify 26 students who were “probably not going to return” the following year based on their personal backgrounds and performance. The president of the university requested the list of 26 names be on his desk the next day so he could take direct action to make sure they stay, Bell says.

There it is. Instead of a helping hand for struggling students, imagine the outstretched fingers of a—better, faster, arguably more engaged—machine. AI writes music nowadays. It performs manual labor. It is, some say, the future of work—one day replacing masses of humans in the workforce, if not entirely.

Textbook maker Pearson is also getting in on the action by developing adaptive learning software and launching virtual tutors for students as they “read” through digital textbook resources.

It’s partnered with IBM Watson to create a virtual tutor similar to Goel’s, and plan to take the technology a step further. Goel’s bot was designed to answer typical student questions. The Pearson/Watson tutor will also ask students questions, quizzing them on their understanding of course material. The tutor can even pick up on when students use the right words to describe the wrong concept.

Someday, bots could be integral to college. They could be your tutor, advisor, grader—essentially, the bulk of teachers’ work. Students already are taking lectures online and consuming personalized software instead of reading textbooks. It’s not a stretch to imagine the university of the future as a series of private dorm rooms, filled by students chatting with programs all day long. (That teacher bot may have even been built by a bot who was built by a bot.)

John Beherns, vice president of advanced computing and data lab at Pearson, envisions his virtual tutors will soon teach students, not grade them. Still, there are kinks to work out. “In a classroom there is a social interaction and understanding,” he says. “If you agree you are working on a rough draft together, you know it won’t count to your grade.”

Similar boundaries are necessary as more of education turns to AI. (For what that word really means, see: Quartz’s complete guide to artificial intelligence.) The AI tutor is designed to work with students who speak naturally and freely, without the stress of formal assignment.

But data will exist from its interactions that can be reported back to the professor of the course. Often, that’s useful; professors will benefit from seeing which of their students are struggling, and why—but that could be a slippery slope of knowing far too much. It’s worth remembering, though, that in-person interactions can also be murky: professors’ and teaching assistants’ impressions of students’ already have the potential to bias their exam and essay grades.

The tech is there to use the bot-tutors as oral examiners. Pearson is also making software that can grade individualized homework—like thoughtful written responses—not just multiple-choice math questions. Machine grading, which they say is entirely objective, would ideally cut down on grade inflation and leaves students little cause to fight their professors for higher marks.

The Bill and Melinda Gates Foundation have funded software that aims to help vulnerable college students pass their classes, while Netflix CEO Reed Hastings is an angel investor in DreamBox learning, which helps younger students with math. Priscilla Chan and Mark Zuckerberg are financing digital programs to make learning more self-directed for school-age children. (Zuckerberg’s ultimate plan for education is to have kids basically all teaching themselves.) None of these has been the panacea that education’s cost problem needs—but maybe, just maybe, each gets us a step closer.

Evidence of a breakthrough, however, is admittedly limited. Between 2013 and 2015, Bill and Melinda Gates offered a grant to implement adaptive learning (software that offers custom tailored curriculum) at 14 higher education institutions, reaching 19,500 students in classes with high dropout rates. Based on this experiment, the evidence suggests adaptive learning did not improve grades or rates of course completion. The tech is still too new to make a definitive judgment.

There are also many academics like David Albouy, an associate professor of economics at University of Illinois, who are skeptical the robots are coming for teaching jobs anytime soon.

Life in middle-class America all but mandates a college degree. A four-year bachelor’s is no picnic—it can cost around $250,000 and set students back decades in debt. In the last 40 years, the cost of attending university increased more than three-fold.

Late economist William Baumol called it “cost disease“—the fact that education, as opposed to other industries where machines cut out human functions, seems to require humans no matter what, so universities must eternally raise teaching wages, lest their professors flee to higher-paying jobs. Salaries, wages, and benefits make up 50% of Harvard’s annual expenses, totaling more than $2.3 billion, while revenue from tuition was under $1 billion. Technology, it seems, can’t replace the kindness of a kindergarten teacher or the sage ramblings of your favorite college professor.

Accepting more students, with different educational needs, means spending more on cost-diseased labor. In America, just one in 20 adults had a bachelor’s degree in 1940, and now more than one in four do; in the 1950s in the UK, less than 4% of the population went to university—now almost 50% do. Universities are not whimsy-ridden ivory towers anymore. They are a place to gain necessary skills. To signal to potential employers that one is capable, competitive, and ready to work.

For decades, economists assumed that education’s costs were doomed to forever increase faster than inflation, because people need to teach people. Baumol, however, did not exactly anticipate artificial intelligence. AI could upend the economics of teaching. Pearson stresses its tools aren’t intended to replace professors or teaching assistants. They’ll simply do away with the most tedious aspects of teaching.

If you eliminate all the humdrum teaching work, universities can hire fewer professors and teaching assistants after all—and still service the same number of students (or perhaps even more of them) at a smaller budget. It’s just not clear how many of the teachers still need to be kept to provide that one most irreplaceable aspect of education: inspiration.

That’s the paradox inherent in artificial education. Cheaper means better, but it also means less personal—so is it better? Can it replace some of the tasks teachers do—or perhaps, the teachers altogether?

Goel’s class might give an insight into that future. When his students were told Jill Watson wasn’t real, they reported being pleasantly surprised, even “flabbergasted.” One student, Jennifer Gavin, ruefully said (paywall), “It seemed very much like a normal conversation with a human being.”