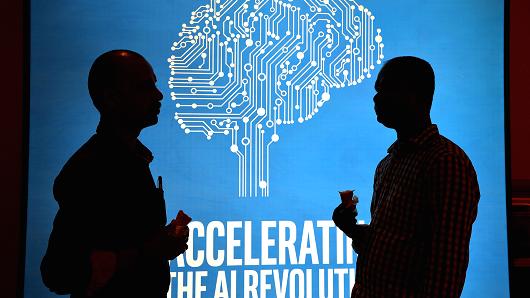 From Amazon’s Alexa learning which restaurants its users like, to Apple’s iPhone predicting the next word in a text message, artificial intelligence (AI) is already having a significant influence on everyday life.

But Northwestern economist Benjamin Jones and his colleagues are now asking what happens to economic growth if artificial intelligence starts generating original thought. They are among the researchers looking at how much more human work AI can automate, including the generation of new ideas.

“If machine learning can really take over all human tasks and take over ideas of innovation, then it would be possible to get a radical change in the growth rate” of the economy, Jones told CNBC in an interview. “But the real question is going to be: can AI take over all of the essential tasks?”

Jones, along with Chad Jones of Stanford University and Philippe Aghion of the College de France wrote about their research in a paper entitled “Artificial Intelligence and Economic Growth” for the National Bureau of Economic Research earlier this month.

If rapidly-improving artificial intelligence can provide the markets with innovations to improve the workplace, some jobs could see skyrocketing wage growth while others could become obsolete.

AI activity has been accelerating, with the world’s top technology companies leading the way. Self-driving vehicles have been one popular subject of experimentation. Chipmakers including Nvidia have refined their products to better suit AI computations, while Amazon has long used AI to recommend products in its e-commerce business.

This week, Google-owned DeepMind published the latest findings of Alphago, its project in which a computer learns how to play the board game Go. This latest installment, dubbed Alpha Zero, managed to beat Google’s existing AlphaGo 100 times consecutively after only three days of training. This happened completely without human training.

Jones and his research team looked at different scenarios. The first modeled growth if people could be replaced by AI in all tasks. Other models looked at growth with partial automation. There weren’t any stark numerical findings, but the ongoing research is aimed at finding how AI can be useful in generating economic growth, as the steam engine did in the 1800s and early computer chips did in the middle 20th century.

In one model, replacing labor with artificial intelligence, the research team showed that only AI and economic capital could be required for the generation of new ideas.

Some have hypothesized that AI could enter into a rapid cycle of self-improvement, with each new cycle more intelligent than the previous one. Such a development could dramatically change the way people live.

But, Jones said, there is ongoing disagreement among economists on whether AI can — or even should — reach the point where it can generate original ideas. One of the most important lessons of their research is that economic growth may be constrained not by what humans are good at, but rather by tasks that are essential yet hard to improve.

In farming, for example, while fertilizer and combines boosted growth for a while, a finite amount of arable land has kept production bounded.

“The way to think about it is bottlenecks,” explained Jones. “We are vastly better at growing food than we were 100 years ago, but by virtue of automation it now only accounts for 2 percent of GDP.”

“We have computers that are mind-bogglingly fast,” continued Jones. “And yet, growth recently has been slower than it has been. Our limit to economic performance probably isn’t computation, right? We’re still heavily constrained by things we can’t or find harder to improve.”

Another possible bottleneck is what the researchers called “search limits.”

The idea suggests that the most obvious innovation ideas are discovered first and new ideas become increasingly harder to find. While AI could help speed up that search, it may be subject to a finite universe of new ideas.

Still, Jones said he is excited about the research.

“What’s interesting about AI is that it seems like we’re on the edge of tasks that are cognitive,” he said.

To be sure, a number of innovators and scientists don’t believe artificial intelligence is a great idea.

Tesla and SpaceX CEO Elon Musk has repeatedly warned against AI, going so far as to declare that competition for the technology will be the “most likely cause of World War III.” Earlier this year, Musk said humans must somehow merge with machines or risk becoming irrelevant in the age of AI. The billionaire is working on a company called Neuralink to do just that.