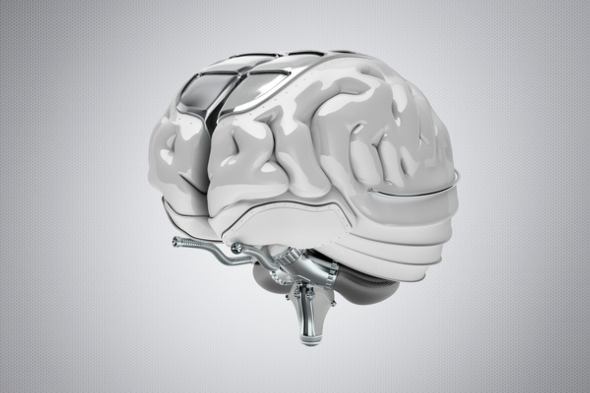 Despite the rapid advancement and heavy investment in artificial intelligence (AI) and robotics, we still cannot put a human-like brain in a robot—not now, nor in the foreseeable future. It is a matter of physics.

The human brain is made of bio-circuits with a massive number of interconnecting neurons—about 100 billion of them. Our brain weighs about 1.500 kg (~3.5 lb) and consumes roughly 40 watts of power. Building an equivalent “brain” with today’s most advanced silicon-based digital technology would result in a computer 1 million times heavier that consumes a million times more power! That is equivalent to the power consumption of a medium city of 100,000 homes.

Since intelligence can’t be built inside the robot, is there a way to accomplish this outside? Fortunately, we are now at the time in history when this is not only possible, but inevitable. The impetus is cloud computing and mobile communication. The former provides intelligence and the later provides connectivity.

We can cluster thousands of computer servers together to form a gigantic cloud computer that can compare to the complexity of a human brain. With recent developments in AI, intelligence capabilities that are comparable to, or in many cases beyond, human capacity are being developed. Without the limitation of increased weight and power consumption, it is just a matter of time before we can build that cloud brain for intelligent robots. Millions of robots can share this brain and train and learn together.

With the intelligence in the cloud, mobile networks can provide the connectivity with many robots. The human brain is connected to the rest of the body using another neural circuit made of ions, the nervous system. It is quite slow compared to electronics, taking between 50—300 milliseconds for a brain signal to travel to the various muscles and organs inside of our body. Vision is the fastest operation of the brain, with delays of about 30 ms for signals leaving the eye to reach the brain. By comparison, in the amount of time it takes the brain to signal the body, the modern communication network, using light (fiber optics) and electromagnetic waves, can send messages tens of thousands of kilometers.Today’s 4G LTE mobile networks can send multiple megabits of signals per second over a distance of thousands of kilometers with less than 100 ms delay. That is sufficient for human-level perception and mechanical control. Furthermore, with the coming 5G mobile standard we will soon be able to improve performance and scale 100 fold! Thus, mobile communication networks can serve as the nervous system for connecting the cloud brain with the robotic bodies.

We see the same relationship in computing speed. The human brain operates in the range of 500 to 1,000 Hz, whereas today’s computers operate at several GHz, and are thus one hundred thousand times faster! Thus, while the brain is incredibly small, light and energy efficient, it operates slower than computers and transmits slower than existing mobile networks. Because future-generation networks will be operating at speeds beyond what humans can handle, one could think of these future network build outs as serving not humans, but rather the machines in our midst. Robot vision, speech, analysis and other capabilities will harness the known intelligence of the world in the cloud.

While the big challenges of human-like intelligence and connectivity to it can be achieved, there are other priorities that must be addressed. Chief among these is security. It is clear that new, ultra-high reliability is vital to the success of cloud-connected robots. Users must have assurances that their robots are under complete authorized control—24/7/365. If this control is ever compromised, then the compromise would have to be instantly detected and the robot disabled.

Very smart cloud-robots will be an integral part of our world in the not-too-distant future. Mobile networks will enable performance similar to human interactions. Scientists and engineers have made many advances to this point in time, but it is hard to imagine anything more exciting than what we are about to create, as we approach the human intelligence benchmark.