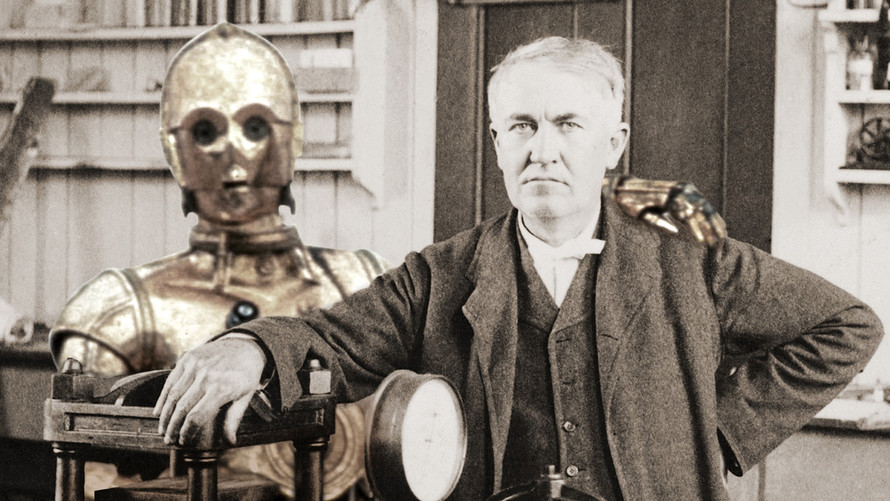 In fact, key sectors that make up much of the world economy, from oil & gas, transportation and medicine to aviation, finance and defense, are already being reinvented with artificial intelligence.

So far, we’ve seen AI used to build machines that are excellent at perception tasks. These systems excel at recognizing human faces, detecting potential machinery failures based on sensor data or transcribing spoken words to digital text. We’ve also seen AI take competent action in areas such as autonomous cars that drive more safely than humans do and game-playing machines that can out-compete the world’s greatest Chess and Go champions.

But soon, AI will manifest its powers in a new area, one that could have even greater economic and business implications than cars that drive themselves or the warehouse robots that run Amazon’s vast operations.

It will become the next Thomas Edison.

As an inventor holding 22 U.S. patents with dozens more pending, I make this claim after careful consideration.

Artificial intelligence has immense potential in enabling virtual “idea factories” — synthetic invention machines that can come up with everything from product concepts and mechanical designs to visual art and background soundtracks.

In some ways, the power to create things — to advance technology via invention — has been one of our highest functions as human beings. But with AI now poised to out-invent us, forward-thinking scientists and investors are discovering ways to leverage this new technological superpower to drive success in our businesses, and ultimately, to deliver value to the world.

It is already happening in aviation. Commercial airliner giant Airbus is using generative algorithms that use AI techniques instead of mechanical engineers to design new, lightweight structures for use in aircraft interiors. Bastian Schaefer, innovation manager at Airbus, explained to Wired magazine how algorithms helped design a new interior partition structure that drastically reduced weight and consequently saved on fuel. “Our goal was to reduce the weight by 30%, and we altogether achieved weight reduction by 55%. And we’re right at the beginning,” he said.

Pharmaceutical leader GlaxoSmithKline GSK, +1.76% GSK, +1.60%  announced a $43 million investment in July aimed at leveraging artificial intelligence for drug discovery. AI techniques, such as Generative Adversarial Networks (GANs), are being used to generate candidate molecules that may present a cure for an ailment such as cancer. The speed with which these systems can find promising molecules outpaces what human researchers could do on their own. Merck MRK, -0.11%Johnson & Johnson JNJ, +0.83%  and Sanofi SNY, +1.75% SAN, +1.86%  aren’t far behind.

At the other end of the spectrum, Google’s GOOG, +1.46% GOOGL, +1.33%  Brain team has launched a “creative AI” effort called Project Magenta that aims to “advance the state of the art in machine intelligence for music and art generation.” The project has already produced some impressive outcomes both in AI-composed music and synthetic systems that can create human-style doodles and sketches.

Human musicians and artists don’t have too much to fear at the moment, but this may soon change. It is not that there won’t be any room for human creators, but it is likely that a measurable percentage of the commercial work done by people in these fields will go the way of machines.

Once plagued by slow hardware, insufficient data and a lack of funds, progress in AI is now proceeding at a blistering pace. In fact, advances in AI during the last few years have outpaced expectations. In 2005, Stanley, Stanford’s autonomous car won the DARPA grand challenge by navigating a 132-mile off-road course with no pedestrians or other urban obstructions in 6 hours and 53 minutes. Four years after this breakthrough, numerous autonomous cars were on the road, using AI to recognize objects such as traffic signals, pedestrians and other cars and to control the car’s acceleration, braking and steering. By 2016, Google’s autonomous cars had already driven two million road miles. But Waymo’s cars added another million autonomous miles in just seven months!

Significant advances in simulation systems that can verify proposed designs before they are put into production, rapid prototyping techniques such as 3-D printing, and generative artificial intelligence algorithms that can generate ideas and design autonomously present a powerful trifecta. These technologies taken together are opening the door for the process of invention to be digitized, mechanized and made almost independent of the human intellect.

AI, with its post-common-sense way of thinking, and its relentless speed and scale, holds the promise to deliver better, faster and cheaper in almost every product category that matters.