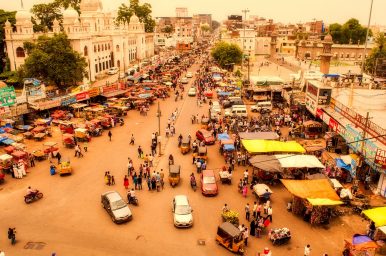 The artificial intelligence revolution has had, and continues to have, a profound effect on the lives of millions of people living in modern high-income economies. A young city-dwelling American today, for instance, is likely to regularly use a smart virtual assistant, such as Apple’s Siri, Amazon’s Alexa, or Microsoft’s Cortana. If she lives in a state that allows autonomous vehicles on its roads, she’s likely to be a passenger in an experimental self-driving cab from Uber or Waymo before too long. And if she happens to visit Seattle, she can choose to get groceries and ready-to-eat meals from Amazon Go, an automated store where there are no checkout counters.

For an average Indian, however, such a life is still far out of reach.

Although nearly half a billion Indians have access to a smartphone, they are unlikely to make the most of it — or realize it can be a tool that can augment their intelligence and knowledge base — because the software it runs is largely tailored for Western users. Google Assistant, for instance, which is a virtual assistant that can be installed on most phones that run Android, the most popular mobile operating system in India, supports just two out of India’s nearly two dozen officially recognized languages: Hindi and English. Indian users who own iPhones have it even worse. They have no choice but to talk to Siri in English.

For similar reasons, smart speakers, which have lately become a hot commodity in European and American markets, are yet to gain traction in India.

The problem is not that the software giants who’re creating the smart products don’t want to support Indian regional languages. It is that they can’t. Most AI-related technologies today are powered by deep neural networks, which need colossal amounts of annotated data to train themselves. Speakers of India’s regional languages simply don’t seem to generate enough of such data. For example, the Universal Dependencies project, a grammatical annotation project Google uses to train its networks, currently has less than 1,500 annotated sentences in the Telugu language, which is spoken by over 70 million people in India. Compare that with Finnish, which, despite having less than 6 million native speakers, has nearly 35,000 annotated sentences.

Language is not the only barrier that stops Indian users from appreciating smart tools. Developers of the tools also fail to take into account the fact that there are vast cultural differences between populations within India. As a result, intelligent suggestions, for instance, on websites such as YouTube, Google Play, and Amazon tend to be notoriously inaccurate here. Content that is popular among people from states with larger populations almost always takes precedence over content that is relevant to those from less populated states, even if it’s utterly alien to them. Additionally, thanks to large gender disparities in education and wages, the content tends to be heavily biased toward male users.

It’s also going to be a long time before Indians get to see fully autonomous cars, the poster boys of artificial intelligence, on their roads. Currently, there are not many automobile manufacturers training such cars in India. Reasons include badly maintained roads, scarce road signage, unruly drivers and pedestrians, and, most importantly, lack of government support. None of the Indian states have clear laws for such vehicles. Furthermore, in order to avoid worsening the already bad unemployment numbers, the current Union Minister for Road Transport and Highways has even suggested banning them altogether. Fortunately, there are a few Indian companies, such as Tata Elxsi and Flux Auto, that are working on advanced driver assistance systems, or ADAS for short, which can alleviate the stress Indian drivers face daily.

The true potential of smart tools and services can be felt in India sooner if they are made in India, or are made using data generated by Indians. Western companies are unlikely to meet or even understand the true needs of an Indian user in the near future, primarily because Indians are so diverse. The onus is on Indian startups, and maybe even enthusiastic individuals contributing to open source projects, to make artificial intelligence relevant in India.