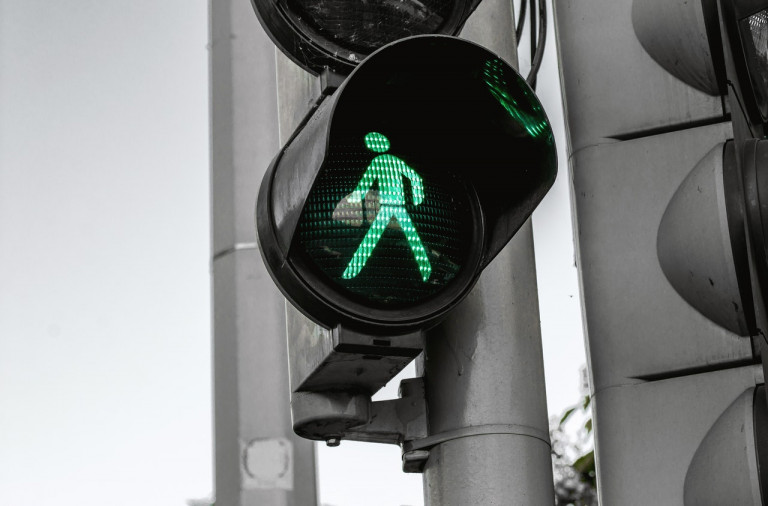 The Beijing-based company raised $5.5 billion this April, giving the company a value of $50 billion. It now has a presence all over the world, having invested in a number of taxi hailing companies on multiple continents.

In Southeast Asia, Didi and SoftBank invested $2 billion in ride-hail company Grab this July. In August, Didi partnered with Dubai-based Careem to make a move into the Middle East and North Africa and invested in Taxify, which currently serves 2.5 million users across 18 countries in Europe and Africa. Before Careem, Didi led a $100 million investment in Brazilian company 99. 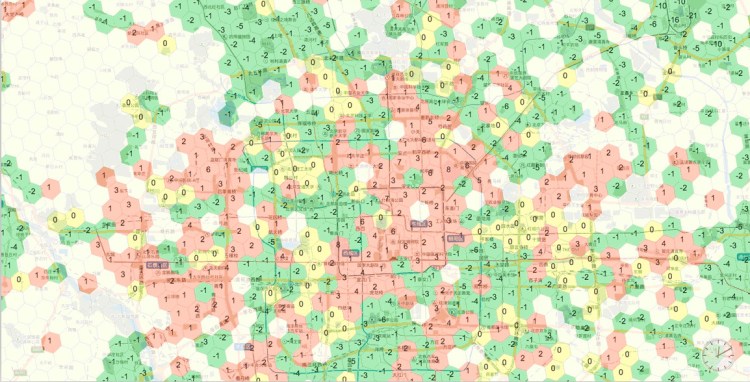 Didi hopes that predictive algorithms will minimize and eventually solve the supply-demand imbalance in mobility markets as shown in this vehicle dispatch map (Image Credit: Didi)

But it’s not only globalization that Didi is interested in. According to Didi, among their 7,000 employees, 50% are engineers and data scientists. At the 2015 TechCrunch Beijing, Stephen Zhu, VP of Strategy at Didi stated that Chinese cities are a bigger challenge than US cities, forcing engineers to seek more sophisticated technology solutions.

So how is Didi using big data to help solve China’s congestion problems? As the above visualization tool shows, Didi uses a data-driven intelligent matching technology to find drivers for riders in a way that maximizes overall transportation for a given area. Red spots show that there is an excess of demand for taxis and private cars, and the green spots show that there is an oversupply of drivers. 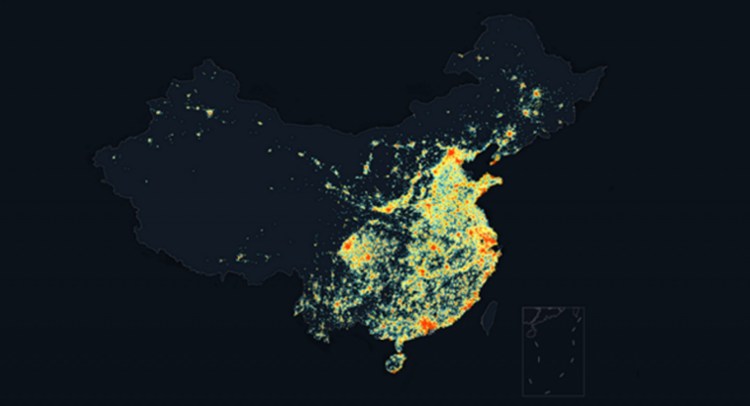 Didi can monitor in real time from which area a user is calling Didi (Image Credit: Didi)

“You see a China map with colorful lights glowing in 400 Chinese cities. Didi can monitor in real time, from which area a user is calling Didi,” Wang told TechNode. “Didi’s  operation is a vivid representation of a city’s or even an entire region’s economic and demographic dynamic.”

Wang noted that after the Pearl River Delta, Yangtze River Delta, and the Beijing-Tianjin-Hebei triangle, Didi’s data shows that Sichuan is coming up to become China’s next hub for growth and regional integration.

“This makes a difference to local employment and economic vitality,” Wang said. “Affordable and efficient transportation is a way to help smaller cities to develop together with the main centers.”

2. Didi is getting closer to predicting and eliminating traffic jams

The Holy Grail of big-data scientists, Wang said, is the power of forecast and therefore intervention. With the value of data analytics, Didi can predict the traffic congestion, by analyzing accumulated previous traffic data combined with their real-time data.

“Today, we can forecast demand about 15 minutes in advance, with 85% accuracy, within a specific region. This allows us to start building our predictive dispatching models, sending vehicles to those hot spots of congestion a bit sooner,” Wang told us. “What if we can do this for entire cities, for longer time periods? When our algorithms are trained with more data, the technology will improve, the traffic manager will be close to the point of a perfect forecast, when a traffic jam is anticipated and prevent it from happening.”

3. Didi is working with traffic police to cut urban congestion

Chinese cities, like their counterparts from Singapore to Helsinki, are working on building sustainable “smart cities”, where Didi believes that it could play a key role. Didi is now working with 20 cities including Nanjing, Shenzhen, Jinan, and Wuhan to improve traffic management with its data capacities.

One such experiment took place in Jinan, where Didi adapted its city dispatch and monitoring system for local traffic police. Besides providing real-time transportation data, the company is also working on projects like smart traffic lights, physical traffic directing screens and reversible vehicle lanes. When applied to traffic management along the city’s main avenue, Wang said, the technology is already cutting journey lengths by 10 –  20%. “We are working on traffic lights at about 100 out of 900 intersections in the city,” Wang said. “If we cover all the traffic lights in the city, then traffic congestion will be hugely improved.”

Didi said data insights are even helping local traffic chiefs better evaluate the performance of their precincts, in terms of traffic operation and management.