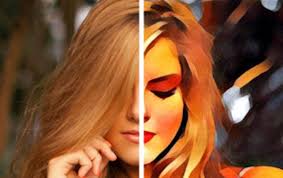 Prisma, the Russian company best known for its AI-powered photo filters, is shifting to B2B. The company won’t retire its popular app, but says in the future, it will focus on selling machine vision tools to other tech firms.

“We see big opportunities in deep learning and communication,” Prisma CEO and co-founder Alexey Moiseenkov told The Verge. “We feel that a lot of companies need expertise in this area. Even Google is buying companies for computer vision. We can help companies put machine vision in their app because we understand how to implement the technology.” The firm has launched a new website — prismalabs.ai — in order to promote these services.

Prisma will offer a number of off-the-shelf vision tools, including segmentation (separating the foreground of a photo from the background), face mapping, and both scene and object recognition. The company’s expertise is getting these sorts of systems — powered by neural networks — to run locally on-device. This can be a tricky task, but avoiding using the cloud to power these services can result in apps that are faster, more secure, and less of a drain on phone and tablet battery life.

Although Prisma’s painting-inspired filters were all the rage last year (the app itself was released in June 2015), they were soon copied by the likes of Facebook, which might account for the Russian company’s change in direction.

Moiseenkov denies this is the case, and says it wasn’t his intention to compete with bigger social networks. “We never thought we were a competitor of Facebook — we’re a small startup, with a small budget,” he said. But, he says, the popularity of these deep learning filters shows there are plenty of consumer applications for the latest machine vision tech.

Moiseenkov says his company will continue to support the Prisma app, and that it will act as a showcase for the firm’s latest experiments. He says the app still has between 5 million and 10 million monthly active users, most of which are based in the US. The company also started experimenting with selling sponsored filters on its main app last year, and says it will continue to do so. It also launched an app for turning selfies into chat stickers.

There have been rumors that Prisma would get bought out by a bigger company. Moiseenkov visited Facebook’s headquarters last year, and the US tech giant has made similar acquisitions in the past — buying Belarus facial filter startup MSQRD in March 2016. When asked if the company would consider a similar deal, co-founder Aram Airapetyan replied over email: “We want to go on doing what we do and what we can do best. The whole team is super motivated and passionately committed to what we do! So the rest doesn’t matter (where, when, with whom).” Make of that what you will.