There are only two drugs approved by the U.S. Food and Drug Administration to slow the progression of ALS (amyotrophic lateral sclerosis), one available since 1995 and the other approved just this year. About 140,000 new cases are diagnosed a year globally, and there is no cure.

“Many doctors call it the worst disease in medicine, and the unmet need is huge,” said Richard Mead of the Sheffield Institute of Translational Neuroscience, who has found artificial intelligence (AI) is already speeding up his work.

Mead, who aims to present the work at a medical meeting in December, is now assessing plans for clinical trials.

He and his team in northern England are not the only ones waking up to the ability of AI to elucidate the complexities of ALS.

In Arizona, the Barrow Neurological Institute last December found five new genes linked to ALS by using IBM’s Watson supercomputer. Without the machine, researchers estimate the discovery would have taken years rather than only a few months.

Mead believes ALS is ripe for AI and machine-learning because of the rapid expansion in genetic information about the condition and the fact there are good test-tube and animal models with which to evaluate drug candidates.

That is good news for ALS patients seeking better treatment options. Famous sufferers include Gehrig, the 1923-39 New York Yankees baseball player; actor and playwright Sam Shepard, who died last month; and cosmologist Stephen Hawking, a rare example of someone living for decades with the condition.

If the research goes on to deliver new medicines, it would mark a notable victory for AI in drug discovery, bolstering the prospects of a growing batch of startup companies focused on the technology.

Those firms are based on the premise that while AI robots won’t replace scientists and clinicians, they should save time and money by finding drug leads several times faster than conventional processes.

Mead from Sheffield is working with BenevolentAI, one of a handful of British “unicorns” — private companies with a market value above $1 billion, in this case $1.7 billion — which is rapidly expanding operations at its offices in central London.

Others in the field include Scotland’s Exscientia and U.S.-based firms Berg, Numerate, twoXAR, Atomwise and InSilico Medicine — the last of which recently launched a drug discovery platform geared specifically to ALS. 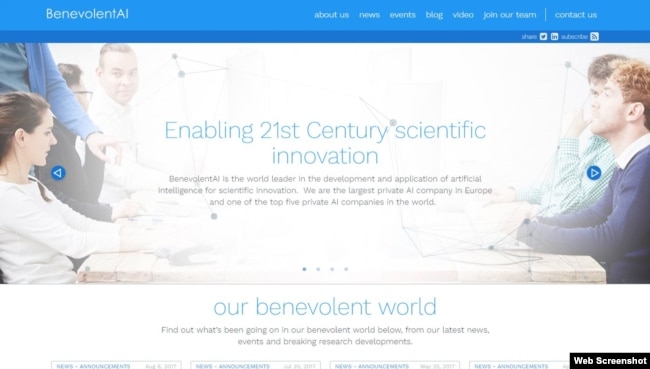 A view of BenevolentAI’s home page.

“What we are trying to do is find relationships that will give us new targets in disease,” said Jackie Hunter, a former drug hunter at GlaxoSmithKline (GSK) who now heads Benevolent’s pharma business. “We can do things so much more dynamically and be really responsive to what essentially the information is telling us.”

Unlike humans, who may have pet theories, AI scans through data and generates hypotheses in an unbiased way.

Conventional drug discovery remains a hit-and-miss affair, and Hunter believes the 50 percent failure rates seen for experimental compounds in mid- and late-stage clinical trials due to lack of efficacy is unsustainable, forcing a shift to AI.

A key test will come with a study by Benevolent to assess a previously unsuccessful compound from Johnson & Johnson in a new disease area — this time for treating Parkinson’s disease patients with excessive daytime sleepiness.

Big pharmaceutical companies like GSK, Sanofi and Merck are now exploring the potential of AI through deals with startups.

They are treading cautiously, given the failure of “high throughput screening” in the early 2000s to improve efficiency by using robots to test millions of compounds. Yet AI’s ability to learn on the job means things may be different this time.

CPR Asset Management fund manager Vafa Ahmadi, for one, believes it is a potential game-changer.

“Using artificial intelligence is going to really accelerate the way we produce much better targeted molecules. It could have a dramatic impact on productivity, which in turn could have a major impact on the valuation of pharmaceutical stocks,” he said.

Drugmakers and startups are not the only ones chasing that value. Technology giants including Microsoft, IBM and Google’s parent Alphabet are also setting up life sciences units to explore drug R&D.

For Benevolent’s Hunter, today’s attempts to find new drugs for ALS and other difficult diseases amount to an important test vehicle for the future of AI, which is already being deployed in other high-tech areas such as autonomous cars.

“The aim is to show that we can deliver in a very difficult and complex area, ” Hunter said. “I believe if you can do it in drug discovery and development, you can show the power of AI anywhere.”