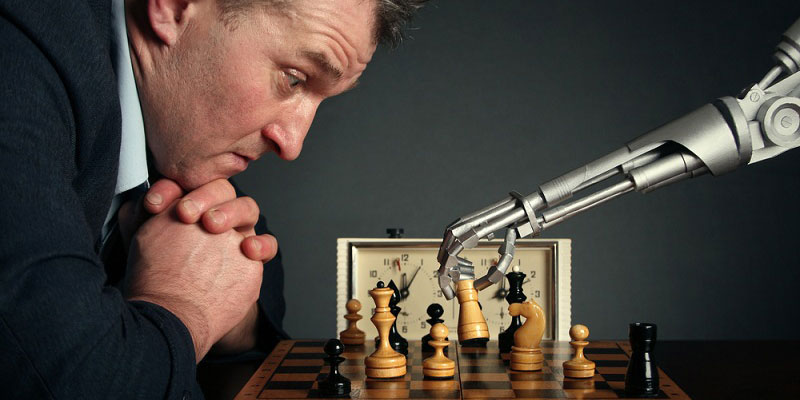 This autumn or post-monsoon, depending on which part of the world you live in, the movie Blade Runner will see a return after 35 years. If you remember the first movie, the artificial intelligence character, or the “replicant”, the antagonist, played by Rutger Hauer, saves the protagonist, played by Harrison Ford, from dying. After that, the protagonist witnesses the AI character’s programmes terminate themselves.

Ford then says: “I don’t know why he saved my life. Maybe in those last moments he loved life more than he ever had before. Not just his life, anybody’s life, my life. All he’d wanted were the same answers the rest of us want. Where did I come from? Where am I going? How long have I got? All I could do was sit there and watch him die.”

That’s AI for you in a nutshell when things become sentient. Computer programmers call it “singularity”, where self-learning software would become aware with every cycle of learning and ultimately surpass human intelligence.

Rolf Bulander, Chairman of Mobility Services, Bosch GmbH, says “New technologies such as AI and ML have already ushered in the era of making networks intelligent and are changing business models.” He adds that in Germany they have already created an ethics committee to understand the man-and-machine relationship in case of automated driving.

“Fundamental questions are being raised today; who does the software save first, a child or the parent. The setting up of the committee clearly signals that human intelligence and machine intelligence should work together,” Rolf says.

Before we have robots taking over the world, serious work is being done in every industry to get tasks done by software and remove human intervention altogether.

Machines are not sentient yet, but we are already in the realm of “Narrow AI”, where mundane tasks such as customer queries and data generationwill not need humans anymore.

The world of Narrow AI

Starting from healthcare and banking to automotive and media, business models are changing thanks to Narrow AI. The languages, mostly Python and even Java, going into AI and ML are all built out of India, which is why the country is aligning its goals to the world’s quest for a global network of artificial intelligence.

The terms ML and AI are used interchangeably these days. But what are they really?

NVIDIA, the $4.5 billion GPU company, explains in a blog that most of the work in AI today can be termed “Narrow AI”, where certain tasks are better performed by technology. So before we have a sentient being (like in Blade Runner), we are already in the era of “Narrow AI”. The bot example was one of them because they use millions of data points that are processed quickly and present immediate action.

Machine Learning, on the other hand, is termed as an approach to AI. It is nothing but algorithms that make sense of data to determine or predict something, thanks to the processing power of chips today. Before Machine Learning comes something known as Deep Learning where engineers try to understand the functions of the brain and how neurons work. So while programming, engineers look at how a machine can function like neurons firing in the brain to perform tasks.

Layak Singh, Co-founder of Artivatic, says: “Engineers today can make a machine understand text, video and images. But every engine needs to be trained to understand patterns and recognise the context.”  Artivatic is building a system for banks to understand credit history of customers and reduce loan defaults.

Startups are clearly playing a major role in innovating faster than corporates, which has led to several curious partnerships. SAP India has invested in Niki.ai, a bot that improves the ordering experience. Then there’s Ractrack.AI, where a bot improves customer engagement and provides insights; it functions as a virtual communications assistant to convert the customer into a client. Racetrack is helping companies turn leads into meaningful engagements by using AI. Another startup, LUCEP, converts all potential queries into leads with their AI engine.

Bobby Reddy, of Indus Ventures, is the Co-founder of Housingman.com, which is building a platform that uses machine learning and artificial intelligence.  “The objective is to generate insights from data and simplify customer interaction with a business and also convert them into leads,” he says.

Indian startups saw $4 billion in risk capital being deployed across 1,040 angel and VC/PE deals between January and December 2016. According to YourStory Research, disclosed funding announcements have shown a decreased value of 55 percent from the same period last year (2015) and a decrease of 20 percent from 2014. About $9 billion in VC/PE capital had been invested in 2015. The number of deals in 2016, however, has increased by 3 percent over the last year. On an average, four startup deals were announced every weekday throughout 2016. VCs predict that going forward machine learning and AI would be key themes to invest in.

The era of voice and vision

Billions of dollars have been pouring into AI across the world.

Leaders like Elon Musk, the founder of Tesla, have said this will create a global apocalypse and should be “regulated”. He expressed this fear because Russian President Vladimir Putin said the race to own AI assets will determine the ruler of the world. Musk also expresses that a system of such intelligence could “start a global war”.

One must really watch Westworld or read Issac Asimov to understand the merits and consequences of AI.

Atul Jalan, founder of Manthan, says, “We are in a great era of change because human behaviour will be out-matched by superior digital technologies. AI will eventually change everything. But humans can do better things than mundane tasks.”

In Manthan’s offices, engineers and marketing teams are jointly working together to build a voice-based AI suite called “Maya”, based on Amazon’s Alexa platform. Maya, when called upon, becomes the virtual assistant to the CEO and dynamically pulls out company sales information across regions. She can even tell what categories did not sell.

“Over time the platform can prescribe what should be done and this will challenge the entire C-Suite of leaders,” Atul says.

The impact of AI is best described in a PwC report on The Future of Work: A Journey Towards 2022 . This predicts that a student protest will erupt globally in 2020 as a consequence of the non-availability of jobs. This prognosis is based on universities not being able to keep pace with sudden changes in economy and technologies such as automation.

Amid the realignment of jobs and the accompanying chaos, companies will push the boundaries of innovation in AI. It will all be about agile IT, sensors, and data, which will change the entire Indian work scenario. Coding jobs will be scarce as all platforms will be available and automated. IT and its allied services will focus on implementing products such as SAP, Microsoft and Oracle on platforms in cloud environments.

Vishal Sikka, the outgoing CEO of Infosys, said the future of Indian IT was not in services, but in software. He was prescient as all global clients want IT to be enabled to business outcomes and building agile applications.

This year, Infosys launched Nia, its AI platform. Nia worked as a PoC in a bank which generated data volume of 596 million trade transactions on a 100-node cluster in the AWS stack. The case was peculiar and it involved pulling data rapidly to avoid fines in reporting. Usually the message insertion rate into a platform is slow; it takes more than 10 minutes. However, Nia achieved it at 130,000 records per second or 18.22 MB per second.

The report execution for 30,000 trade records was done in 35 seconds, with corresponding 120,000 trade line items, including end-to-end processing. If the bank reports delays of more than 15 minutes, it attracts a penalty by the regulator. With the Nia platform, end-to-end processing and reporting just took 35 seconds instead of 10-15 minutes. The platform helped the bank avoid non-compliance and related penalties.

Again, all this is just “Narrow AI”.

Undoubtedly Nandan Nilekani, who ushered in the Aadhar database in this country, will understand the use of AI in processing data. It has a bright future as an investment opportunity, provided CIOs take the plunge in using AI in their companies to reap benefits.

According to Gartner, by 2018 Indian CIOs are expected to spend around a third of their IT budgets on the digital economy. Analytics, cloud services, mobility and digitalisation/digital marketing are the top four spending priorities, as per a survey of CIOs in India. Globally, spending on digitalisation is expected to jump to 28 percent of IT budgets by 2018 from 19 percent in early 2017.

No wonder Google’s AlphaGo, IBM Watson and Bosch Centre for Artificial Intelligence are approaching this subject with so much fervour. Their platforms will power homes, cars and industry.

Bosch is already working with Daimler to launch an autonomous car in the early part of the next decade. It is training a whole range of cars to use computer vision, LIDAR, Radar and Ultrasound to figure out driving autonomously. Nearly 3,000 engineers from Bosch, in Stuttgart and Bengaluru, have one thing in common: they are putting their brains – figuratively speaking – into a super brain. This “brain” can crunch 30 trillion data points per second and will process data three times faster than a human brain can. This “brain”,  powered by AI, has no reason to feel guilty about anything because it is designed to not make mistakes.

In one year since its alliance with Daimler, Bosch has seen revenues of €1 billion from the sale of these sensors with an order book value of €3.5 billion. This is significant because with Elon Musk’s Tesla paving the way for a world where software in the car will determine the travel experience, a vehicle is no longer going to be a single entity. It is going to understand everything, be it the driving methods or shopping habits of a person.

Dirk Hoheisel, member of the board of management, Robert Bosch GmbH, says, “Only AI will make this possible and reduce human error.”

He adds that an AI-led car has superior reflexes compared to human beings. It can interpret if there is a ball or a child on the road.

“We have to improve our sensors to monitor surroundings and think like humans, but only faster,” Dirk says.