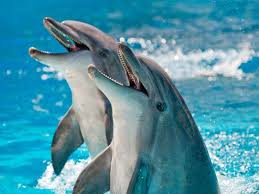 Scientists have developed an algorithm to monitor the underwater chatter of dolphins with the help of machine learning.

The result was a data set of 52 million click noises.

To sort through this vast amount of information, the scientists employed an “unsupervised” algorithm that automatically classified the noises into categories.

Without being “taught” to recognise patterns that were already known, the algorithm was able to seek original patterns in the data and identify types of click.

This enabled the scientists to determine specific patterns of clicks among the millions of clicks being recorded, and could help them to identify dolphin species in the wild.

“It’s fun to think about how the machine learning algorithms used to suggest music or social media friends to people could be re-interpreted to help with ecological research challenges,” said Dr Kaitlin Frasier of Scripps Institution of Oceanography, the lead author of the study published in the journal PLOS Computational Biology.

“Innovations in sensor technologies have opened the floodgates in terms of data about the natural world, and there is a lot of room for creativity right now in ecological data analysis,” she said.

Dr Frasier and her colleagues think their techniques could be employed to sift through large quantities of data and keep track of dolphin populations in a non-disruptive way.

Dolphins are an incredibly diverse family of mammals, and different species use different types of click to echolocate.

This research team’s work so far was able to identify one click type associated with a particular dolphin species – Risso’s dolphin – and they intend to conduct field work that will link other click types with other known species.

They also hope their research will allow them to monitor the impact of oil spills and climate change on the dolphin populations of the Gulf of Mexico.