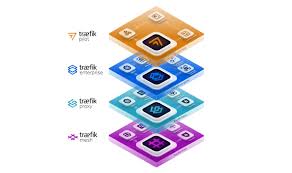 The company said it’s the latest step in its plan to build an open-source networking stack for microservices, which are the components of container-based software applications.

Traefik Labs, which raised $10 million in a Series A round of funding in January, first built an open-source, cloud-native application proxy called Traefik that developers can use to manage inbound connections from the internet to their Kubernetes-based infrastructure. It built Traefik Proxy as a cloud-native alternative to traditional network routers, which lack important features such as service discovery, automation and auto-scaling.

Traefik Proxy, which sits at the center of the Traefik stack (pictured), has become popular with developers, amassing more than 30,000 stars on the GitHub platform where it’s hosted. Some of its biggest users include Conde Nast, eBay Inc. and Mailchimp, the company said.

“We created Traefik because we needed application networking that could handle the complexity and scale of the cloud,” said Traefik Labs founder and Chief Executive Emile Vauge. “It turned out, a lot of other people wanted the same thing: open-source networking built from the ground up for DevOps and microservices. Since Traefik is at the heart of everything we do, it was natural to make it the heart of our identity as well.”

The company has also created Traefik Maesh, an open-source service mesh that’s used by developers to connect, secure and monitor traffic to and from their Kubernetes applications. It provides a dedicated infrastructure layer that controls service-to-service communication over the network, giving microservices a simple way to talk to each other.

Commercial versions of Traefik and Traefik Mesh are bundled in Traefik Enterprise, which adds extra features that provide more scale and security, plus additional deployment and support options.

As for Traefik Pilot, this is a new, centralized software-as-a-service control center and plug-in hub for Traefik servers, the company said. It provides observability, monitoring and security for the Traefik application proxy, and enables users to set alerts and see reports on the health and status of their Traefik instances in real time.

With Traefik Pilot, it’s also possible to create, publish and install add-on packages to extend the functionality of Traefik. Developers can write plug-ins in the Go programming language, and share them with the wider Traefik community in much the same way as they share something on GitHub. Those plug-ins are then published in a common catalog available to all Traefik Pilot users.

“Traefik Pilot opens up Traefik so developers can tailor it to their own needs and make the entire platform more capable,” Vauge said. “What makes Traefik powerful and even fun to use is that it provides both simplicity and flexibility. Traefik automates complexity away, and Traefik Pilot makes the networking stack infinitely extensible.”

“With hybrid and multicloud deployments, it becomes even harder to manage and control network traffic,” Mueller said. “Traefik Labs is following the proven path of many open-source vendors, offering value-added products in the service of its popular open-source tools. It’s a strong statement for open source overall, which is taking over innovation in the technology stack.”

Traefik Labs said it hopes that Traefik Pilot will eventually become the control center for the entire Traefik networking stack.

“What the wire is to electricity, we want to be for the cloud,” Vauge said. “Right now enterprises need many different tools to manage application connectivity, from ingress control to service mesh to global load balancing. We’re creating a simple, unified stack that can be used to manage the entire network across data centers, on-premises servers and public clouds all the way out to the edge.”