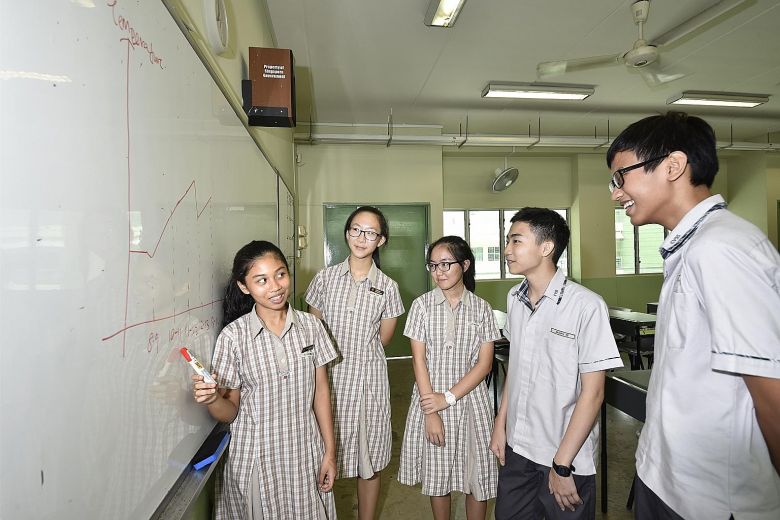 Here’s a tip for study time: If your classroom or study environment is too warm, you might not be able to concentrate or cram for that paper you need to ace.

Five students, all aged 15, from Compassvale Secondary School found that keeping the temperature of the surroundings below 28 deg C was optimal for allowing students to study and stay focused in class.

The research was conducted as part of this year’s National Science Experiment (NSE) Big Data Challenge, organised by the National Research Foundation.

At Compassvale, the team found that a second factor – the noisiness of the environment – did not affect most of the 77 students surveyed. These students could still concentrate well even when noise levels increased during periods such as recess breaks for students of other levels.

Also, humid environments did not seem to affect those in the survey, who wore a SENSg device around their necks on a lanyard. The sensor device was used to measure the heat, noise and humidity levels of their surroundings.

The competition, now into its third year, has two categories – one for secondary schools, and another for junior colleges, polytechnics and the Institute of Technical Education.

The challenge seeks to help participants understand big data, learn more about it and explore how it can be applied to manage real-world issues. Students designed their own experiments to gather and analyse data for their chosen research topic.

The teams then drew conclusions aimed at improving public policy measures in Singapore. More than 400 students from 45 schools and institutions took part this year.

This time, the challenge focused on the theme of sustainable urban living and, for their experiments, participating teams had to address one of the sub-themes such as physical comfort, mobility, neighbourhood, health and well-being, and arts, culture and heritage.

“I joined the competition because I wanted to get a feel of how collecting so much data and analysing it to support our hypothesis would work out,” said Compassvale team member Nicole Tan. “They (organisers) also gave us a very broad theme, so we had a lot of room and had to generate a lot of ideas to get to where we are now.”

The Compassvale team has plans to present its research to the school, and has a few ideas in mind for improving study environments for classmates.

Suggestions include better planning and allocation of study spaces so that students can study in air-conditioned rooms for some of their lessons during the warmer hours of the day.

Another proposal is to increase the number of fans in classrooms.