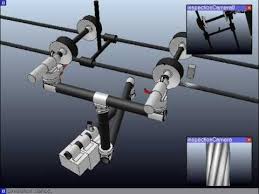 Finding cracks and corrosion on an oil pipeline or refinery flare stack is no game, and yet it might make sense to turn for help to a graphics processor company that made its name in PC gaming. With artificial intelligence (AI) advances from GPU maker Nvidia, Avitas Systems can make industrial inspections at power plants and refineries considerably safer, not to mention faster and cheaper.

Avitas, a GE Venture focused on inspection services across oil and gas, transportation and energy sectors, is partnering with Nvidia to create inspection services powered by AI-trained drones and robots. Using some of the latest advances in AI computing to optimize the use of robotics, Avitas estimates that the technology could reduce industrial inspection costs by as much as 25 percent, with increased safety and reduced turnaround times.

Nvidia’s latest AI supercomputers are being used to train a variety of robots, including drones, crawlers and autonomous underwater vehicles (AUVs)—all of which can inspect areas that are difficult for humans to access, such as underwater pipelines, smokestacks and power lines. For humans, many inspection jobs are also high-risk and expensive, requiring flare stacks, for example, to be shut down for days in order to be cool enough for inspection. A robot, on the other hand, can inspect those flare stacks while they’re still in operation.

The same technology that gives video games their realistic, immersive visual capabilities is well-suited to AI—the computational power to process huge amounts of data. AI creates 3D models that are used to build paths that can be repeated, enabling the robots to collect still and video images from the same angles and locations. The repeatability of those paths means that a wide variety of images can be captured over time and input into Avitas’ cloud-based platform, where advanced image analytics can detect changes and measure exact defects on an industrial asset, such as cracks and corrosion. The platform can also rate the severity of defects, often not visible to the human eye, allowing customers to determine when equipment needs to be replaced and enabling earlier resolution of potential issues.

Avitas stores deep learning models in an AI Workbench, an innovation that can process inspection data in real time and retrain the models to adapt to new use cases. “Working with Nvidia allows us to fully commercialize our cutting-edge, self-service AI Workbench, and we look forward to expanding its capabilities using the new Nvidia DGX Stations with Volta,” said Alex Tepper, founder and head of corporate and business development at Avitas. “With our workbench, our engineers can easily create and access new deep learning models that train the software deployed to recognize defects automatically at inspection sites.”

“Avitas Systems is breaking new ground by bringing Nvidia DGX Station beyond the deskside and into the field for the first time,” said Jim McHugh, general manager of DGX systems for Nvidia. “Using our latest DGX systems to help train robots and better predict industrial defects increases worker safety, protects the environment, and leads to substantial cost savings for companies.”