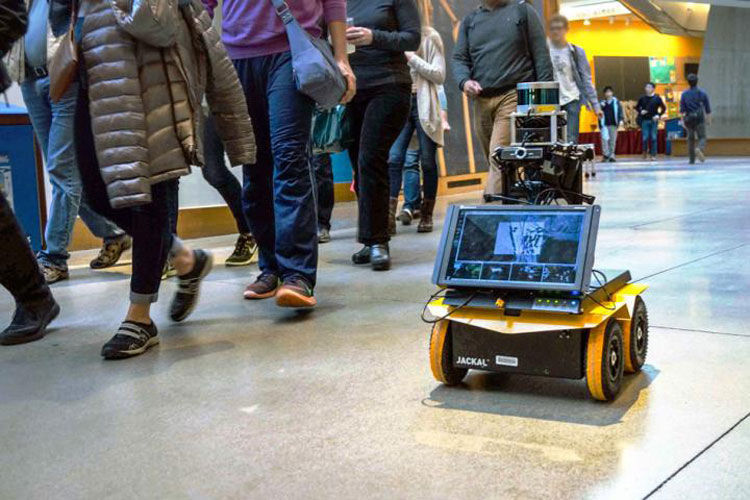 Pass on the left. Maintain a respectable distance from others. Stop or change course to avoid bumping into someone. For most humans, a stroll down a hallway or sidewalk is second nature.

Now, engineers at MIT have designed an autonomous robot with “sociably aware navigation” – the ability to keep pace with foot traffic while observing the unspoken rules of the pedestrian road.

The knee-high cousin of R2-D2 refined its sidewalk skills in the busy, winding hallways of MIT’s Stata Center, successfully keeping up with the average pace of pedestrians without running into – or over – anyone.

The researchers will detail the pedestrian-friendly robotic design in a paper they are scheduled to present at the IEEE Conference on Intelligent Robots and Systems in Vancouver in September. Their work was funded by Ford Motor Co.

New applications for these heads-up devices will multiply as the technology continues to improve, the lead researcher said.

“Socially aware navigation is a central capability for mobile robots operating in environments that require frequent interactions with pedestrians,” said Yu Fan Chen, the study’s lead author and a former MIT graduate student who led the team. “Small robots could operate on sidewalks for package and food delivery. Similarly, personal mobility devices could transport people in large, crowded spaces such as shopping malls, airports and hospitals.”

The seemingly simple task of navigating a busy hallway in a natural way entails a complex set of calculations. A robot must recognize its surroundings, know where it is, identify the optimal path to its destination and execute the path, taking into account the motion of people and predicting their goals and intentions.

The MIT team outfitted the device with off-the-shelf sensors, including webcams, a depth sensor and a lidar sensor, a remote sensing method that uses pulsed laser to measure ranges.

Its localization skills are rooted in open-source algorithms that map the environment and determine the robot’s position. And they controlled the robot using the standards methods used to drive autonomous vehicles.

But motion planning was a challenge, since the paths of individual pedestrians are difficult to predict. “Once you figure out where you are in the world and know how to follow trajectories, which trajectories should you be following?” said team member Michael Everett.

A robot programmed to calculate everyone’s expected trajectories and then plot its own optimal course would spend a lot of time on the side of a walkway, calculating.

Alternately, a robot could be programmed based on a reactive approach, quickly computing new paths to avoid collisions. But since pedestrians are unpredictable – they wander and weave and stop to pet cute dogs – reactive robots tend to be awkward, colliding with people and appearing as if they are excessively avoiding people.

Instead, the MIT team used reinforcement learning, a machine learning approach, performing computer simulations to train a robot to take certain paths given the speed and trajectory of other objects in the environment.

They also incorporated pedestrian social norms during this offline training. For example, they encouraged the robot in simulations to proceed through a hallway on the right and penalized the device when it went forward on the left.

Once the robot was trained in simulation, the researchers programmed it to pursue the optimal paths when it recognized a similar scenario in the real world.

The researchers also enabled the robot to assess its environment and adjust its course every tenth of a second. That way, the robot could roll through the hallway at a typical walking speed of 1.2 meters per second with no pauses to reprogram its route.

“This way, we think our robot looks more natural, and is anticipating what people are doing,” said Everett.

Next up for the MIT team: exploring how robots might handle crowds in a pedestrian environment.