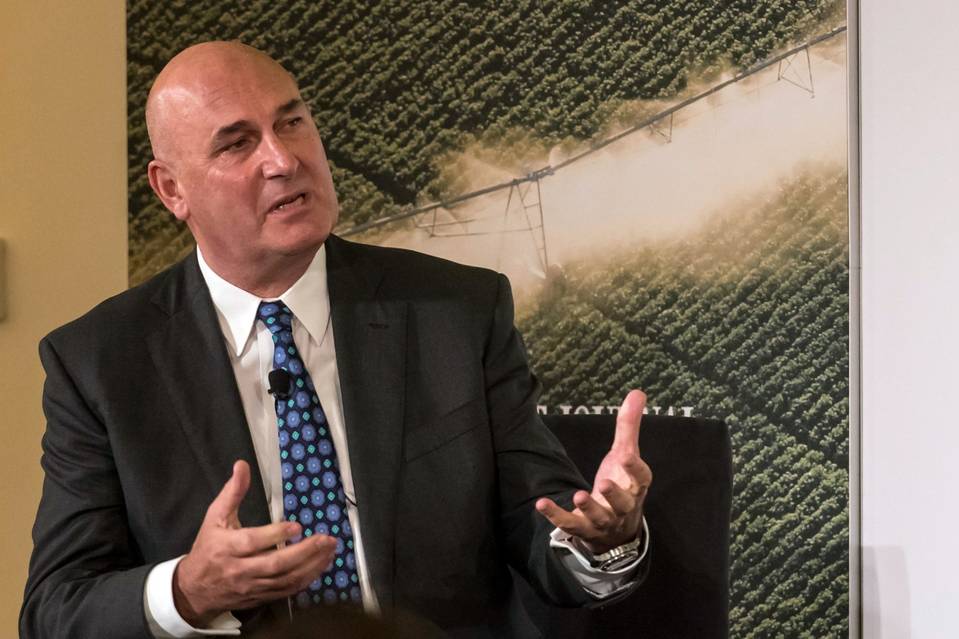 About two decades ago, genetically modified organisms came into popular use. And the technique quickly drew fire from critics for introducing DNA from one organism into another.

Now there are new technologies on the rise that promise to reshape the world of agriculture.

Data science is making it possible to get a much more detailed look at things like how fertilizer can be used more effectively.

Potentially more controversial is a new technique known as gene editing that lets scientists remove negative traits from an organism or add positive ones without introducing any foreign DNA.

Proponents say the method is simply what farmers have been doing for centuries—breeding for certain traits—only much faster and more efficiently.

To find out more about the potential of these new technologies, The Wall Street Journal’s Dennis Berman spoke with Hugh Grant, chairman and chief executive of Monsanto Co., and James C. Collins Jr., chief operating officer of the agriculture division at DowDuPont .

What follows are edited excerpts of the conversation.

MR. BERMAN: What about Crispr [a kind of gene editing] is new and potentially exciting for you?

MR. COLLINS: I think the real aspect of Crispr is the fact that technology that we’ve known for hundreds of years, some of our oldest technology, is actually now our newest technology.

It will allow us to do the same kind of things that we’ve always been able to do. The breeding work that we do every day, much faster. We can do in six months now what used to take us six or seven years.

MR. GRANT: Like gene editing, data science is going to touch broad swaths of our life. What we are seeing is more efficient, more specific, accurate applications of fertilizer, a much deeper understanding of disease in plants and addressing disease at a much earlier stage.

MR. BERMAN: What does that look like for a farmer in the field? Is that being able to apply different levels of nitrogen or fertilizer or pesticide on a square-inch-by-square-inch basis?

MR. GRANT: You plant your good seed in the best land, and you plant more of it. And in land that’s sandy or gravely or burns off early in the spring, you reduce your seeding rates. We’re now at the point where we’re farming one seed at a time.

MR. COLLINS: I’ll give you one other example. For a farmer who, say, grows 1,000 acres, he doesn’t know today which of those thousand acres is his most profitable and most productive and which isn’t. He gets a 1,000-acre snapshot.

As we enter into this digital world and we start to use data, as you suggested, on a square-meter or square-inch basis we’re able to help our grower decode where is his most profitable land, his most productive land. And then we can replicate that completely across those 1,000 acres.

MR. BERMAN: For most of the world, food is about emotion. How do you meet the average person who doesn’t care a whit about what you just said, but has a very emotional reaction?

MR. COLLINS: It’s starting at a very local level. It’s certainly starting about sharing the benefits and the opportunity. We talk about trying to feed 10 billion people by 2050 and needing to maintain the productivity curve that we have today.

We’re going to feed a lot of folks, but we’re also going to create a lot of economic stability, which leads to political stability and leads to prosperity. Explaining that story and talking about how we move the world forward from a stability perspective, it all starts with agriculture.

MR. BERMAN: A gene-edited food or gene-edited seed that creates a food—should that be labeled as a GMO or not? I know this is a somewhat controversial topic. What’s your view?

MR. COLLINS: Let’s be clear. The technology that we’re deploying is the capability that already existed in mother nature. We’ve been using these tools for hundreds of years through the normal breeding process that we’ve used.

Gregor Mendel taught us this, and you learned about it in your high-school biology class.

MR. BERMAN: But again, from an emotional standpoint, it does feel different when a scientist is turning genes on and turning genes off literally as if he or she is God.

MR. COLLINS: The main point there is that we’re working within the genome of corn, for example. We’re not introducing any non-native DNA into corn. We’ve identified a corn hybrid in Argentina that has a desired trait that’s already in corn. Mother nature put it there and we’re optimizing that trait in corn in North America.

MR. GRANT: We’re now getting ready to sell seed for the spring of 2018. We’ll be 22 years into planting GMOs commercially. Twenty-two years. So billions of acres, trillions of meals. It took us 22 years to get labeling figured out for GMOs. It shouldn’t take that long for gene editing.

Here’s how I would think about it. It takes seven years to breed a corn hybrid. To go from a seed to truckloads of seeds, it’s about seven years.

The Crispr, the gene-editing stuff, is faster, but the rate-limiting step is going to be how fast can you produce the seed.

And that’s going to take time. You can have hundreds of edits in one seed. But for the seed to bring a new variety is still going to be six, seven years. So we get time to figure this out. But to your earlier question, how do we avoid what the last 22 years looked like?

We need to get in front of this as an agricultural, as a business, community. We need to do better job explaining it to the consumers.