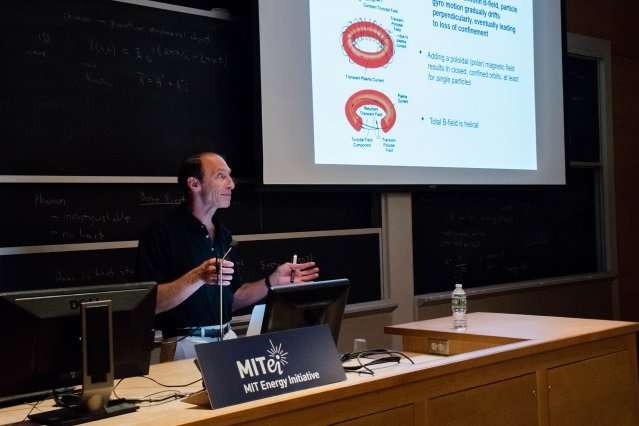 Robert Granetz has been a research scientist in MIT’s Plasma Science and Fusion Center for more than 40 years. He recently gave a talk hosted by the MIT Energy Initiative (MITEI) on using machine learning to develop a real-time warning system for impending disruptions in fusion reactors. A specialist in magnetohydrodynamic instabilities and disruptions, Granetz discussed how research in this area is bringing us one step closer to creating a stable, net-energy-producing fusion device.

Q: What makes plasma different from other states of matter? What are the challenges of working with plasma as an energy source?

A: In a gas at normal temperatures, the negatively-charged electrons and positively-charged nuclei are tightly bound into atoms or molecules, which are electrically neutral. Therefore, there are no forces exerted between particles unless they happen to actually collide. (The gravitational force acts between all masses, but gravity is much too weak to be relevant.)

When gas particles do collide, the collisions only involve a pair of particles at a time, and the kinematics of the collision are very simple, just like billiard ball collisions. So we can easily calculate the behaviors of gases. However, at the high temperatures that we need for fusion, the thermal energy of each atom or molecule is much, much greater than the binding energy that holds the electrons and nuclei together, so the neutral particles break up into their constituents, i.e. electrons and nuclei, which we call the “plasma state.”

Therefore, in a plasma, all the particles are charged, and there are long-range electric and magnetic forces acting between the particles. A single electron or ion influences the motion of about a billion other electrons and ions simultaneously, and all of those billion other particles are simultaneously influencing every other individual particle. In addition, the electrons and nuclei have extremely different masses, so their velocities are very different. Also, since all the particles are charged, they can interact strongly with electromagnetic radiation. All of these complicating properties mean that in practice, we can’t accurately calculate the detailed behavior of plasmas from the basic equations of physics.

Q: In the context of fusion reactors, what’s a disruption?

A: To date, the tokamak concept for a steady-state fusion reactor outperforms all other concepts in terms of energy confinement. The tokamak relies on driving a large current—of the order millions of amperes—through the plasma to produce the magnetic field structure required to obtain good energy confinement. However, this large plasma current is somewhat unstable, and is subject to sudden termination, usually with very little warning. When a disruption occurs, the considerable thermal and magnetic energy contained within the plasma is suddenly released very quickly, which can lead to damaging thermal and electromagnetic loads on the reactor structure.

The whole goal of fusion energy is to develop large power plants to generate electrical power on the grid, and replace today’s fossil-fueled utility power plants, and even replace fission nuclear power plants. But if a fusion power plant is subject to disruptions, its electricity output would suddenly turn off. Even if the most damaging consequences can be avoided, it could be hours or days before the plant can recover and get back online, only to be subject to another disruption at some later time. No utility would want to use fusion energy if that were the case. If we’re going to rely on the tokamak concept for fusion reactors, we need to avoid or mitigate disruptions.

Q: How can machine learning address this problem?

A: The signs that a disruption is imminent are often quite subtle. Fusion researchers continuously measure a number of characteristic plasma parameters during a plasma discharge, and we have reason to believe, both from empirical experimental evidence and from theoretical understanding, that some of these measured plasma parameters may provide indications that a disruption is about to occur. But this information is not straightforward to interpret, not just with respect to the occurrence of an impending disruption, but also with regard to the timing of an impending disruption.

In an attempt to solve this problem, my team—which consists of myself, postdoc Cristina Rea, graduate students Kevin Montes and Alex Tinguely, and a dozen scientists at other U.S. and international labs—has built up large databases of measured parameters which we believe are relevant to disruptions, from several years’ worth of experiments on several different tokamaks around the world. We are now applying machine learning techniques to these data to see if we can discern any patterns that would accurately predict whether or not a disruption will be occurring at a specific time in the near future. When dealing with large, complicated datasets, machine learning may be a powerful way of finding subtle patterns in the data that elude human efforts.