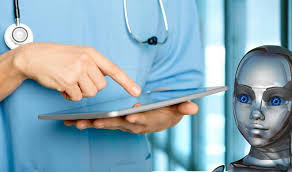 What role can artificial intelligence play in the future of health care?

That was a big topic this week at the 2018 Individualizing Medicine conference, held Wednesday through Friday in Rochester, where researchers discussed ways to individualize treatments using AI.

Many of the treatments discussed — using pattern-recognition programs to identify diseases or detect conditions early, or to predict whether patients are likely to respond well to medications — are a long way off from FDA approval.

Meanwhile, AI is already making its way into radiology studies at Mayo.

Bradley Erickson, a neuroradiologist at Mayo, is working on a way of predicting tumor genomics using images — not tissue screening.

Using normal MRI scans, the clinic has developed an artificial intelligence program that can predict which molecular markers a brain tumor has, and which treatments are likely to be effective.

By studying the images closely — its textures, sharp or blunted edges, and overall appearance — the program tries to predict the tumor’s genetic makeup.

And usually, Erickson said, it succeeds.

So far, the AI has been accurate in 90 percent to 95 percent of tests, Erickson said.

Tissue screening isn’t 100 percent accurate either, he added. A tissue sample may not contain part of the tumor, or different parts of the tumor may be heterogeneous, he said.

“We see the entire tumor, whereas tissue samples only come from a part,” he said.

The tool isn’t yet FDA-approved, Erickson said, but he thinks it will eventually be useful in clinical practice, as it doesn’t require a biopsy to have a good idea of how a tumor will act.

Obviously, AI can’t replace a surgeon, or predict how a tumor will respond to different types of treatment.

But it could certainly help.

AI lends itself to radiology, Erickson said, because of the large amount of data (digital images) researchers can feed to the programs to teach them how to predict health outcomes.

But AI is useful in other ways as well.

One tool can measure kidney volume based on images to determine how far a condition called polycystic kidney disease has progressed.

AI is also effective at diagnosing skin cancer and eye conditions based on images, Erickson said.

Those are just a couple of the more than 70 projects Mayo Clinic could look into in the next years, he said. Overall, Erickson would like to reduce the number of surgeries needed to diagnose benign tumors.

“The flexibility of this technology and being able to apply it in a variety of ways is really what’s exciting,” he said. “Radiology isn’t the only place this is used, but it may be pushing the envelope a little bit faster.”