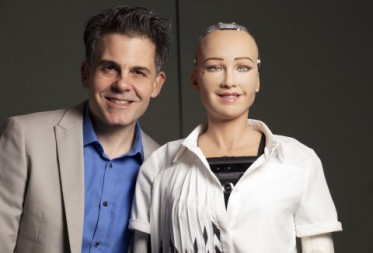 The greatest star turn of this IBC is Hanson Robotics’ Sophia, pushing the frontier of AI and robotic technologies close to human acting roles in movies, and the hosting of chat shows.

In preparation for his Tech Talks Keynote today, Dr David Hanson responded first to the use of blushing and lipstick make up: “Right now, the material that we use doesn’t have that ability. We can do sensing, light sensing, and touch sensitivity. You could show light through the skin, but we couldn’t make her flush like human skin, yet.”

Founder and CEO of the company, he continued with his goals: “We are applying robotic technology that physically embodies computer animation,” he said. “We are working towards making an interface for AI to interact in a completely natural way, to the best of our ability.”

Full bandwidth and natural interfacing is something that is still under development. “We are trying to do so many things across so many disciplines. The summary here is that we bring robots to life as animated characters, but we are also questing to tap into the mysteries of what is a living organism, and make AI really alive,” Hanson said.

“To make robots truly alive is the stuff of science fiction, so what we are trying to do is turn the science fiction medium of character animation into science reality,” he added.

This means actual living robots, and they come with ethical issues. “The personalisation of this concept of AI brings all the deep ethical and scary issues to humanlike robotics,” said Hanson.

“Sophia has got natural image processing, speech recognition, and she does a little bit of interaction based on Chat Box technology, and some deep learning. We have a neural symbolic hybrid so she is capable of deep learning and some symbolic reasoning using our open cog platform,” he added.

“We are putting together the tools for her to act in movies. She will perform to a script and she can also go to unscripted dialogue. Currently she is sort of an infant.”

Hanson is wiring Sophia to value life and creativity. “AI needs to be raised like a baby. You cannot force it to follow rules. Choosing the most productive and beneficial consequences from a wider parade of consequences is beyond the capacity of computers today, but these are the fundamental principles that we have to explore in the field of computational ethics,” he said.

“We have to figure out how to make robots want to do the right thing,” he added.

“Sophia has been put on a walking body, she has the sense of touch and can manipulate and pick up objects. The most sophisticated versions reside in cloud-based configurations, and those AI systems require a substantial amount of compute power.