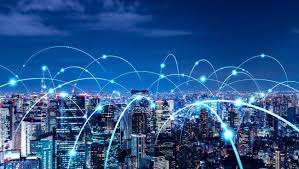 With so many people working from home through lockdown, technology has become something of a go-to news story over the last few months. Covid-19 has already changed lives and accelerated the trend towards home working, and it just happens to coincide with the imminent arrival of superfast mobile broadband, in the shape of 5G.

Its importance for iOpt is that it enables the company to place humidity and CO2 sensors in homes and monitor the results centrally. This allows housing providers to monitor damp and household heating patterns as well as highlighting instances of fuel poverty (homes not properly heated).

According to the company’s CEO, Dane Ralston, existing networks are well suited to iOpt’s existing solutions. As and when 5G finally becomes commonplace across the UK, the new superfast wireless technology will simply provide additional scope for the company’s applications.

“There are two sides to the IoT wave,” Ralston explains.

“The first, which is already in daily use across the country, involves connecting ‘things’ in both homes and industry to supporting devices, typically apps on smart phones. The second, more futuristic wave, will need the massive additional addressing power of 5G to extend connectivity to a vaster array of things, from driverless vehicles to drones.

Today, iOpt is already making a name for itself providing ‘first wave’ connectivity.

“The bulk of our business is about providing information across housing association home portfolios and Local Authority housing stock,” he says.

Ralston says that this use of the IoT is “all about monitoring assets, making sure they are performing as they should and working optimally, helping to extend the usefulness and the life of assets”.One of the more obvious application areas involves expensive assets like aeroplanes, and high end cars, which is actually where iOpt initially focused its activities.

“This all started for me when I was doing audio systems for Aston Martin. We found we could use the car’s own network to see other data coming through the hi-fi, such as oil temperature, brakes and so on, and we could add a facility to send that information in real time to the garage, much as you see a Formula One car transmitting data to the team engineers as it goes around a racetrack,” Ralston remembers.

From there he went to work for Goodrich, in Prestwick, Ayrshire, doing much the same thing looking at data coming off aircraft engines. “You could see a whole bunch of key data, such as the number of landings and take-offs the aircraft had performed to date. Obviously, aircraft doing multiple daily flights between Scottish airports and London built up far more ‘cycles’ (take-offs and landings) than aircraft doing Transatlantic flights.

“That affects the health of the aircraft and determines maintenance intervals and the like. So on an expensive asset like an aircraft, that kind of connectivity between the aircraft and the operational centre is very important. But you can extend that to industrial applications and to portfolios of social housing, where you can create a lot of value for the organisation,” he says.

By installing sensors in housing association and local authority homes iOpt enables either the local authority or the housing association concerned, to see at a glance if there is an issue. “What we found when we started getting involved with social housing was that there is a real need to get an early warning if a house, for example, is not being heated properly so humidity and damp is building up in the property,” he explains.

Some tenants do not realise that high humidity and low temperatures can really degrade the fabric of a property over time. If this is allowed to build up the cost can run to thousands of pounds in repairs when the damage finally comes to the housing association’s attention. Using the IoT to monitor the property can therefore save the association significant sums.

“One of the really good things about this is that if it emerges that the cause of increasing damp and humidity in the property is that the tenant is experiencing fuel poverty, and can’t afford the heating bills, that is something the housing association or local authority can help with at an early stage,” he explains.
It is always going to be cheaper for a landlord to find ways of helping the tenant out of fuel poverty than to have to repair a property that is being damaged because it is not being properly heated through the winter. Early action will also have a very positive impact on the health of the tenant family, potentially saving the NHS considerable sums, and enhancing the well being of the occupants.

The IoT solutions provided by iOpt can also help with property management. If a property is supposed to be vacant and the heat sensors show that it is warmer than it should be, or if the housing association or local authority has had a motion sensor installed, that could trigger a notification for a site visit. Discovering that a vacant or abandoned property has been taken over by squatters is obviously going to be important to any housing association or local authority.

“If insulation has been put into a home retrospectively, but it is not properly ventilated, then what tends to happen is that it simply traps more moisture in the property. Humidity sensors in the property will show this build up. When you see humidity levels climbing in a property, you know you are not winning!” he says.

“What we see sometimes is that the cause of rising humidity in a property is because a tumble dryer is being used constantly, but is not venting steam to the outside, but allowing it to escape inside the house, under the sink, for example.

“This can generate a tremendous amount of water vapour, leading to mold and damp.”

Sensors in homes and offices undoubtedly have an important role to play as the world of the Internet of Things becomes an accepted part of our lives. For example, sensor technology could play a key role for the NHS. “Our system could be used to get patients home safely and faster,” Ralston says.